Home Main The world economy is on disarray 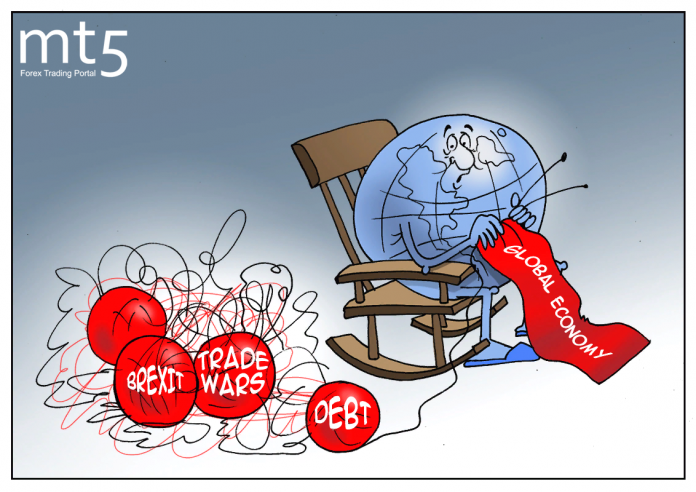 One by one, the world economy is getting bad vibes. All along the last couple of years, the Trump directed trade war has been destroying economic momentum. Britain’s’ Brexit dance added to the world economic problem in Europe.

Financial sector woes in several emerging markets also added to the misery of the global economy towards the beginning of the current year.

Lastly, the drone strike by Houthi rebels in Saudi Arabia’s precious oil asset shocked the world. Moderate crude price was the only consolation in the otherwise sinking global economy.

A series of bad news dominated the global economy during the last few months without having even a notable good news. Financial markets also came down heavily during several trading sessions.

Macro data from several economies indicate a strong downtrend and perhaps, stronger than the 2007-08 crisis period. In both the emerging market and advanced economies, main macro indicators including industrial production, export figures, quarterly GDP growth and employment data all have shown down trends.

In the US, manufacturing production decreased by 0.4% in July though it came back to 0.6% in August. The US economy expanded by 2.9 percent in 2018 and is expected to register a lower 2.3 percent in 2019 and falling to 1.8 percent next year. US is the star performer in the advanced world with this low growth.

Contraction in UK and Germany

The UK economy contracted by 0.2% between April and June. This is the biggest fall since the fourth quarter of 2012. UK’s agony with the Brexit plan has been discouraging investment and exports.

Germany is the industrial powerhouse of the world that never shown the character of an ageing economy. But economists predict that the German economy is going to contract this year. Germany’s export growth suffered a bigger jolt with slowing exports to China.

In the emerging markets, slowdown has spread like a contagious disease. Extending from the bright performers – China and India to the typically trouble hit economies like Argentina, economies are registering lower growth.

China’s GDP growth is reported at 6% whereas observers warn an even lower growth that is not correctly reported. Manufacturing growth for August came down to 4.3% as per the latest industrial sector data.

In Asia, Singapore’s economy entered into a recession. Its economic growth registered -3.3 % during the last quarter. Steep fall in Singapore’s growth is a reflection of the poor state of the world economy as the South East Asian economy is known to grow depending upon world trade and finance.

Altogether, the world economy is in a disarray. There is no hope for a recovery with countries focusing on individual centric policies. Fall of trade is the main indicator that the world economy is not seeing any revival symptom. A coordinated recovery attempt by boosting trade is vital for reinstating growth.

India to enforce retaliatory tariff on US goods