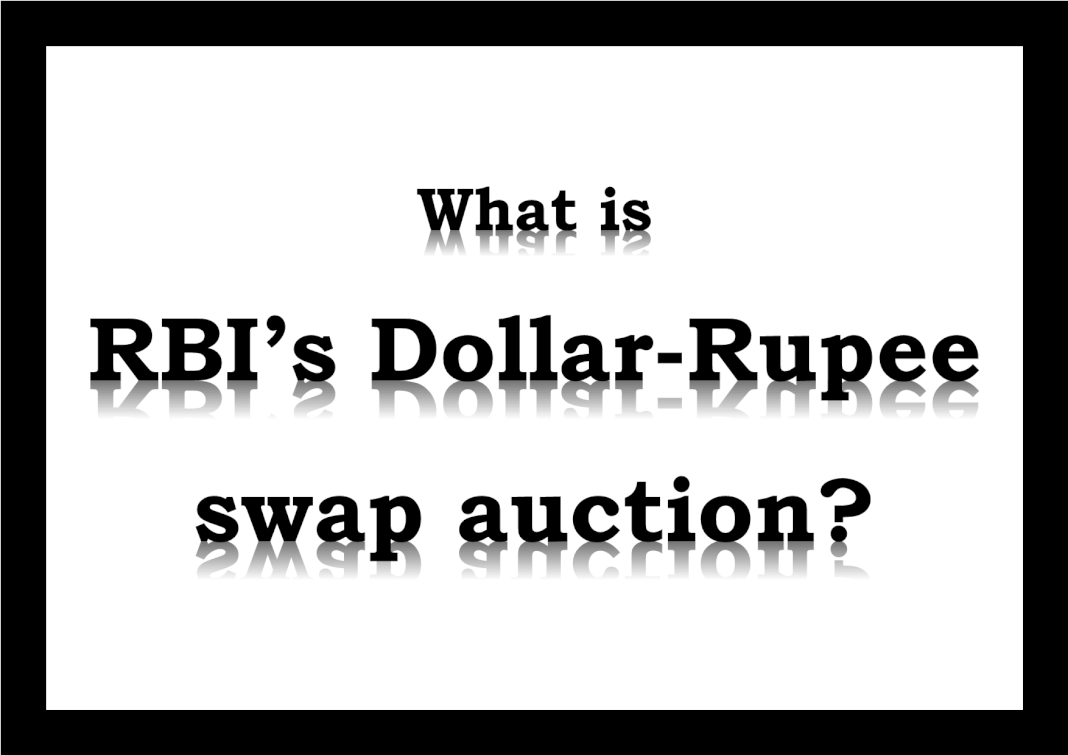 Liquidity management is a daily exercise of a watchful central bank. We know that in India, there are numerous liquidity management facilities with the RBI. They help the RBI for the injection and absorption of liquidity in the economy. The Liquidity Adjustment Facility (LAF) that contains the Repo, reverse repo and term repo is the king of the RBI’s liquidity operation tools.

The Rupee-Dollar Swap may be either to sell dollars to banks or to sell rupee to banks. When the RBI sells dollars to banks, it will get rupee in return. On the other hand, when the  RBI sells Indian Rupee, it can get US Dollars from banks in exchange.

So, the Rupee-Dollar Swap can be in two forms:

(1) US Dollar/Rupee –Sell/Buy Swap: Here injection of US Dollar into the economy as the RBI sells US Dollars by recieving Rupee from participating banks.

(2) US Dollar/Rupee –Buy/Sell Swap: Here the RBI injects Rupee into banks by selling rupee while receiving US Dollars from the participating banks.

When RBI sells US Dollars, it will be indicated as US Dollar/Rupee -Sell/Buy Swap.

When RBI buys US Dollars, it will be indicated as US Dollar/Rupee -Buy/Sell Swap.

For example, the RBI conducted US Dollar/Rupee –Buy/Sell Swap during March 2019 to inject rupee liquidity into the banking system by buying US Dollars and exchanging rupee when it realised that banks are having shortage of Indian currency.

But on March 12, 2020, the RBI announced a US Dollar/Rupee –Sell/Buy Swap to by selling US Dollars to inject US Dollar into the fiancial system. The swap was conducted on March f16, 2020 in the background of the rupee falling to nearly Rs 74/$.

Adding to these existing tools, the RBI has introduced a new liquidity instrument in the form of US Dollar-Rupee buy/sell swap auction. The facility became operational on March 26th, 2019; when the first US Dollar-Rupee Buy/Sell Swap auction was made by the central bank for $5 billion.

Then another swap auction for the same amount was made on 23rd April 2019.

What is the US Dollar-Rupee Buy/Sell Swap auction?

According to the RBI, “The swap is in the nature of a simple buy/sell foreign exchange swap from the Reserve Bank side. A bank shall sell US Dollars to the Reserve Bank and simultaneously agree to buy the same amount of US Dollars at the end of the swap period.”

The Dollar-Rupee Swap is a liquidity management tool that is operated through a swap (exchange) between the US Dollar and the Rupee; aimed to facilitate comfortable liquidity situation in the economy.

So, rupee is swapped for dollar and the participants in the swap are the identified banks. What makes the new facility unique is its connection with foreign currency management at the same time dealing with rupee liquidity in the financial system.

Under the swap, the RBI conducts auction for getting dollars from banks while exchanging rupees. The rate at which dollar is exchanged for rupee is based on the spot exchange rate on the auction day. Swap is for a specific period say, three years and on that day, the banks have to buy back dollars from the RBI while paying rupee back.

An important part of the auction is the premium that banks are ready to pay ie., a higher price for dollars while buying back dollars from the RBI at the end of the swap period (say, three years). For example if the RBI gives Rs 70 for each dollars now, the banks may be willing to pay Rs 80 per dollars after three years (Rs 10 premium).

The purpose of the swap is to give liquidity (rupee) to banks though dollar may seem to be the hero of the swap exercise. Don’t forget that the mission of the Dollar-Rupee swap is liquidity management.

What is the objective of the USD/INR Buy/Sell Swap auction?

By function, a liquidity instrument is aimed to adjust rupee liquidity in the financial system. Here, in the case of the US Dollar-Rupee buy/sell swap auction, the RBI injects rupee into banks by receiving dollars from them.

As the RBI gives rupees to the bank by receiving dollars, the process results in rupee injection by the RBI into the banking system. This is the liquidity content or impact of the US Dollar-Rupee Buy/Sell Swap auction.

So, the ultimate purpose of the mechanism is to manage rupee liquidity; though other objectives may also be realised.

The RBI has conducted a USD/INR Sell/Buy swap on March 16, 2020. Here, the RBI announced selling of US$ 2 billion for rupee to banks.

The purpose of the swap was to inject more Dollars into the economy in the context of the covid driven fall in the value of rupee.

After the swap auction, banks offered 154 paise premium for getting dollars. The swap will have a six month time period and it will be returned by September 2020.

Dollar-Rupee Swap Buy-Sell swap by the RBI is a simple swap between the two currencies.

As a beginning of the process, the RBI gives a notice about the Dollar-Rupee swap, the date and the target swap amount in terms of Dollars.

Next, on the notified date, the RBI conducts an auction (on a given day and time) to buy a stipulated amount of dollars (eg $5 billion) from the eligible institutions (banks).

Through the auction, what the RBI doing is collecting US Dollars (eg. $5 billion) from authorised dealers (mainly banks who have authorised dealer license to deal with foreign currencies) and exchanging equal value of rupees at the current spot exchange rate.

Who can participate in the bid?

Authorised dealers who are Category -I bankers are the eligible institutions who can participate in the swap.

Bid by the institutions

Each bidder can make bid for offering at least $ 25 million (additional offers in multiples of $1 million can be made) and there is no upper limit (the sum offered by four bidders was around $ 5 bn for April 23rd auction).

Out of the auction, the RBI will be collecting dollars from the selected bidder banks by exchanging rupees.

After the stipulated period of three years, the banks can recollect the exact amount of dollars given to the RBI by paying rupee. The notable factor is that banks have to pay a premium (higher price for dollars) to the RBI while repurchasing the dollars from the RBI.

During the quote, the banks will be indicating the premium they are ready to pay for getting back dollars in future.

An example will make everything clear.

Suppose, a bank made a successful bid and offered to give $ 1 billion to the RBI at the April 23rd, 2019 auction. In return, the RBI should give equal value of rupees to the bank based on the spot exchange rate at the auction time.

So, as per the auction, RBI gets $1 billion whereas in return the bank gets Rs 7000 crores.

Now, what the banks must pay to the RBI after three years?

(2) the premium it is willing to pay (the most important one of course) per dollar after three years.

Imagine that our case study bank quoted a premium of Rs 8 (800 paisa) in its quote. This means that for each dollar, the bank has to pay an addition of Rs 8 after three years when it is repurchasing the dollars from the RBI.

The implication of the premium is that for each dollar, the bank has to pay Rs 78 (Rs 70 for one dollar + Rs 8 premium) after three years.

This means that after the swap period of three years, the bank will get back $1 billion from the RBI while giving Rs 7800 crores to the RBI (Rs 7000 + Rs 800 crores premium).

The cut-off premium and the selection of the successful bidders

In the April 23rd auction, there were 255 bidders (banks) and together they offered $18.65 billion whereas the RBI’s plan was to accept just $5 billion. Now, how the successful bidders are selected?

Here the bidders are selected on the basis of the premium they have offered. Banks who have offered highest premium are selected by arranging the bids on a descending order. Remember the RBI’s auction amount is for $5 billion size.

The bank that offers the highest premium will get the priority. This means that if the last bundle of dollars of the $5 billion is given to the bank that offered 800 paisa (Rs 8), then Rs 8 will be the cut off yield. All banks who were selected for the bid will be offering the cut of yield of Rs 8 or more and will be eligible for the facility. Banks that offered lower than a premium of Rs 8 will be rejected. In the case of the April 23rd auction there were 255 banks and together they offered $18.65 billion for an auction size of up to $5 billion.

The cut-off premium was 838 paise for the April 23rd auction. In the first auction on March 26, the cut-off was 776 paise. Higher demand for the swap shows the banks’ interest and a higher premium indicates a gain situation for the RBI and rising costs for the banks to get immediate money in exchange for dollars.

Why the US Dollar Rupee Swap as a liquidity instrument?

Now, the question is why the RBI has come out with such a novel instrument to manage rupee liquidity? There are several proven liquidity arrangements like the LAF under the present liquidity framework. Besides that, managing rupee liquidity by connecting with dollars and the foreign exchange market will have some other impacts as well.

The advantage of Dollar-Rupee swap as a liquidity instrument is that it will help the RBI not to continuously depend on using other instruments like bond buying to inject liquidity. In few months, the RBI buys around 70-75% of the total government bonds issued in the market to inject money into the system. Remember, when the RBI is buying bonds, money goes to the system. If instruments like the Dollar -rupee swap is used, higher dependence on bond buying can be avoided. Some other implications and relevance of the Dollar-Rupee Swap is described below.

Interesting implications of the swap

2. Reduced dependence on bond buying: it will reduce bond-buying by the Reserve Bank of India. Hence, there is a concern that the forex swap may reduce the need for the RBI to buy government bond from the market and thus may increase the yield for government bonds. The swap will produce negative effects on the bond market because of the prospects of reduced bond purchases by the RBI. In brief, liquidity management will be made independent of the bond availability.

What is Banks Board Bureau (BBB)?

What is faceless assessment in tax administration?

What is Banks Board Bureau (BBB)?

What is faceless assessment in tax administration?

What is Special Safeguard Mechanism under WTO?