On Monday, crude price rose by 20% on intraday at the Brent market in London in the background of the attack. More importantly, the attack proved that a militia can hit one of the biggest industrial infrastructures and this means that tension in the Middle East may rise.

Now, what are the implications of this major disturbance on India’s economy?

Remember, India is the world’s second largest oil importer, and the country imports nearly 80% of its total crude required. Nearly 30% of India’s import bill goes for crude import. Besides, most importantly, India is having a trade deficit of around $180 bn. Any rise in crude price will have macroeconomic implications on Indian economy. Following are the main effects of the current oil shock on Indian economy.

Major macroeconomic effect of the crude price will be the return of inflation to the moderately high levels. Over the last four years, inflationary situation was mild in India. Only once inflation crossed 6% and for most time, it hovered around 4%. The low inflation is the only happy macroeconomic factor in Indian economy in the context of declining GDP growth rate, falling exports and several other adverse trends.

Inflation usually appears in primary products including food and energy. Food prices have been softened due to higher production. The next factor is the fuel prices including petrol and diesel. Over the last couple of years, crude prices also were moderate and thus inflation remained under the comfortable level. Now, with the rise in crude prices and the resultant price rise in petrol and diesel, inflation may make a comeback in our economy. With slowdown, the rising prices will be a double shock for the economy.

India is the second largest importer of crude after China. In the context of the attack, Saudi Arabia promised India to stable crude supply. Still, the higher price will be the biggest concern.

In the context of declining exports, higher import bill be unbearable for us in this difficult time. Already, India is one of the top five trade deficit countries in the world. Higher crude prices will widen our trade deficit.

There are several crude price related factors that may weaken the rupee. First is the direct impact i.e.., the effect on trade deficit. Here, higher trade deficit will weaken the currency as the demand for Dollar goes up in the market. Secondly, given the potential for growth depressing effect of the trade deficit, inflation etc., foreign capital outflow may occur. This will further weaken the rupee (by increased demand for dollar by foreign investors when they exit the market).

But higher crude price may compel the government to reduce taxes so that the petrol and diesel prices will not go further. Here, with the reduced tax rates, tax revenue of the government may fall.

The current crude price rise may negatively affect macroeconomic recovery efforts int the slowdown hit economy. The rising inflation may tempt the RBI to increase the interest rate. Any rise in interest rate will be a disincentive for higher spending in the form of both consumption and investment. This will have an adverse effect on the current recovery effects made by the Government and the RBI that aims to boost spending.

The government has to make necessary adjustments to manage higher crude prices. Still, the tensive gulf region doesn’t guarantee absence of further escalation. In this context, we are entering turbulent times where crude importing country like India will be subject to the adverse effects of the conflict. 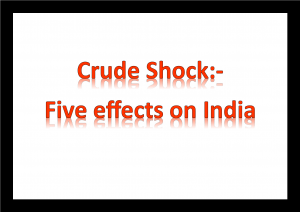 What is Red-Herring Prospectus?