Home Classroom Why GST is a friendly tax regime for MSMEs?

The new higher limit is applicable only for goods providers. For service providers, the limit continues to be Rs20 lakh for all states except for special states where it is Rs10 lakh. Similarly, the new limit will not be applicable for selling goods inter-state, i.e., from one state to another.

Tax analysts assess that that annual revenue loss on account of doubling exemption limit to Rs 40 lakh, when all states implement it, will be around Rs 5,200 crore.

The higher (exemption) limit (of Rs 40 lakh) is applicable for those businesses who deal in goods and also do intra-state trade and not for those who do inter-state transactions.

States can continue to retain the previous limit of Rs 20 lakh if they feel that higher exemption limit of Rs 40 lakh is causing base erosion (tax loss from low number of taxpayers).

Since a very large part of GST comes from formal sector and large companies, the increased exemption limit will give more comfort to the taxpayers than producing revenue loss effect for the government.

The GST filing system has been made convenient for the small taxpayers. Small taxpayers with a turnover of upto Rs 5 crores have to file returns quarterly rather than the monthly filing. Sahaj (B2C), Sugam (B2B and B2C and normal quarterly filings are reducing the workload of small businesses.

Under the composition scheme, there is a low tax rate for small businesses both goods and services. The beneficiaries are identified in terms of turnover.        Under this scheme, low turnover firms can opt for a concessional tax rate if their turnover is below the set limit. Similarly, there is low compliance procedures or compliance costs for small business.

As per the latest regulation (effective from April 1, 2019), small businesses with a higher turnover limit of up to Rs 1.5 crore can pay just 1% tax and will have fewer procedural formalities.

The 1 per cent tax became and the 1.5 crore limit became effective from April 1, 2019 for manufacturers and traders and restaurant services. The previous limit was Rs 1 crore. The composition scheme limit remains at Rs 75 lakhs for N.E states & Uttarakhand.

In the case of services, businesses with inter-State supplies, manufacturers of ice cream, pan masala and tobacco, and e-commerce players cannot opt for the composition scheme.

The Composition scheme was initially applicable only for goods providers but later the GST Council in its January 2019 meeting permitted service providers and those dealing in both goods and services with a turnover of up to Rs 50 lakh to opt for composition scheme with effect from April 1, 2019.

The GSTN has provided a Free Accounting and Billing Software to Small Taxpayers.

These are some of the leading measures that support the MSME sector. Several others like automatic refunding of input tax credit for exporters, simplifying the input tax credit system etc. adds to the benefit of the small taxpayers under the GST. 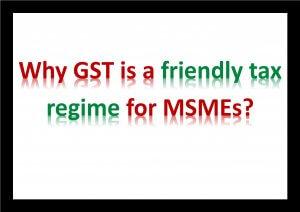 What is Commission for Agricultural Costs and Prices?