Home Classroom What is zeroing methodology for estimating anti-dumping duty?

Zeroing methodology when it is related to the estimation of dumping, is the practice of disregarding the higher price for the imported product vis a vis the price existing in the home market of the exporting country.

Background info: Dumping is the practice followed by an exporting country where it is charging a lower price in the international (export) market compared to the price prevailing at home. For example, suppose, the price for mobile handset in China is $500 whereas it exports at $450 to Malaysia. This is a case of dumping to the value of $50 (it is called dumping margin). Purpose of selling the product at a lower price is to compete out the competitors including the domestic producers in Malaysia. Finding this dumping tactics, Malaysia can impose an anti-dumping duty on imported Chinese handsets. This anti-dumping duty is permitted by the WTO provided that the imposing country is following right procedures.

Now, how dumping margin and thus the dumping duty is to be calculated?

Here comes the deceptive role of a different methodology called zeroing that is adopted by the US against imports from other countries.

Dumping takes place when: China exports mobile handsets at $400 per piece in the US market.

In the same way, we can say that there will be no dumping when the price charged by China from exports to the US is $500 or higher.

Suppose that China is charging $600 from some its exported handsets whose price is $500 in the home market. In this case, the there is negative dumping margin of $100.

But the US methodology of estimating dumping is different. It follows zeroing methodology by disregarding all the negative dumping margins by considering them as zero. On the other hand, it imposes antidumping duty by focusing on that part of the imports where there is dumping margin (imported price is lower that the home market price).

This methodology of disregarding the higher price (considering negative dumping margin as zero) for the imported product vis a vis the price existing in the home market of the exporting country in the estimation of anti-dumping duty is called zeroing.

What is the net effect of the zeroing methodology?

The zeroing methodology has inflated the dumping margin and hence the US was able to impose higher anti-dumping duties on imported products including that from EU, Japan and from developing countries.

What is the WTO Appellate Body ruling on zeroing methodology? 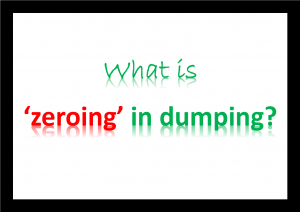 What is a currency swap agreement (India -Japan)?