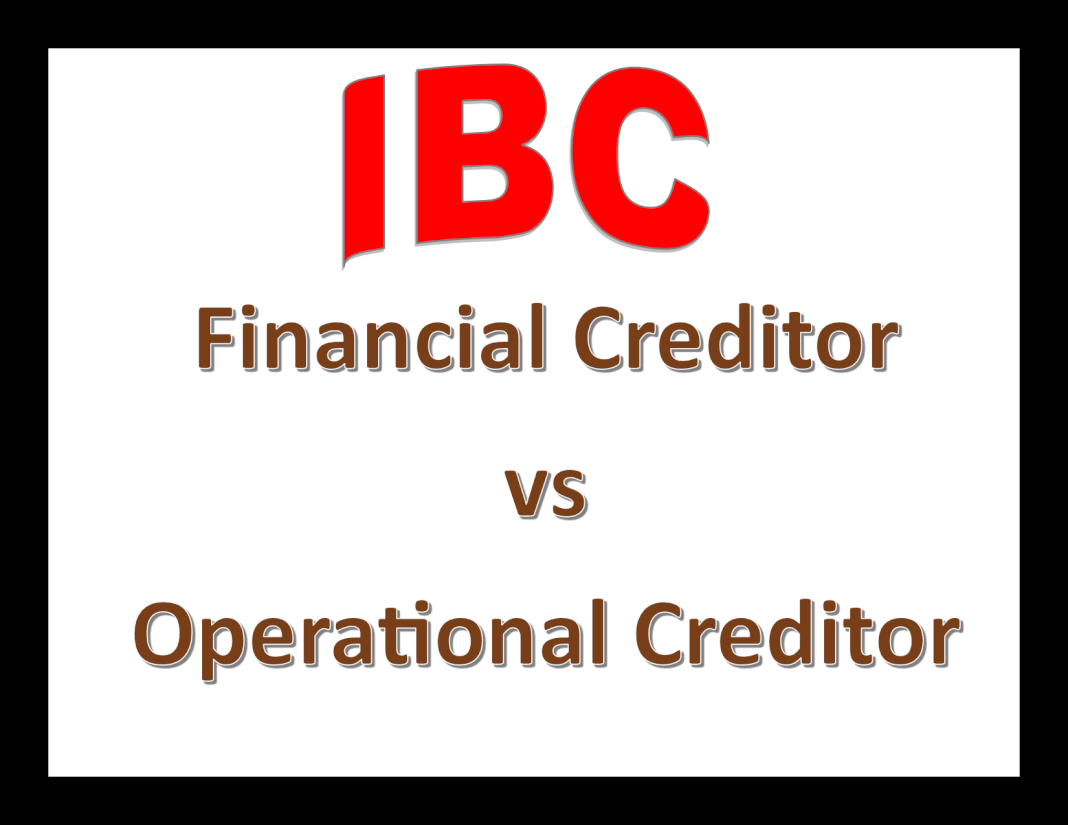 The financial creditors are basically entities (lenders like banks) that have provided funds to the corporate. Their relationship with the entity is a pure financial contract, such as a loan or debt security.

1. Who is a financial creditor?

The financial creditor in simple terms is the institution that provided money to the corporate entity in the form of loans, bonds etc.

1. Money borrowed against payment of interest

2. Any amount raised by acceptance under any acceptance credit facility, dematerialised form etc.

3. Any amount raised through the issue of bonds, notes, debentures, loan stock or any similar instrument.

The Supreme Court in a remarkable verdict clarified that in the case of housing projects, the homebuyers should be treated as financial creditors. The implication is that their obligation will be serviced out first when developers make default.

2. Who is an operational creditor?

An operational creditor is the entity who has a claim (corporate has the debt) for providing any of the four categories to the defaulted corporate- goods, services, employment and Government dues (central govt, state or local bodies).

3. Rights of the two types of creditors

The IBC gives certain rights to the creditors both financial and operational; in the resolution process. From the submission of requests for resolution to liquidation, there are various steps and procedures for resolution. The IBC here gives rights and responsibilities to various creditors.

(a) Operational creditors and the right to initiate resolution process

According to credit rating agency ICRA, out of the 1,858 corporate debtors referred to the NCLT upto March 31,2019, nearly 920 or 49 per cent cases have been referred by the operational creditors.

(b) Operational creditor’s right in the committee of creditors

The Committee of Creditors (CoC) is the decision-making body that decides the course of action on behalf of the debtors in the resolution process. Here, the IBC prescribes that the Committee of Creditors shall consist solely of financial creditors. The resolution plan can be implemented only if it has been approved by 66% of the creditors. Only operational creditors having aggregate dues of at least 10% of the total debt shall be given the notice of the meeting. But these operational creditors don’t have the voting power. So, the right of the operational creditor is to sit in the CoC if he has the threshold credit but don’t have the voting power.

(c) Operational creditors and the distribution of proceeds: who should bear a higher loss (means higher hair cut)?

(a) Financial and operational creditors must be given similar treatment (which has been interpreted to mean the same percentage of haircut); and

(b) Discrimination amongst financial creditors on the basis of existing priorities or security interest is not permitted in a resolution plan.

(d) Rights of the operational creditor in asset distribution in the case of liquidation.

When the committee of creditors fails to approve a resolution plan within the stipulated time period or demands liquidation, the adjudicating authority can pass an order for liquidation of the corporate debtor.

IBC Amendment 2019: Priority and Value of Security to be considered by COC

The IBC Bill specifies that while approving the resolution plan, the CoC is can decide the manner of distribution of proceeds and can take into account the order of priority amongst creditors, including the priority and value of the security interest of a secured creditor. This means the when the proceeds or reimbursements from a corporate defaulter is taken, the priority can be set by the CoC in the distribution of such proceeds among various creditors.

What is a cess? How it differs from surcharge?

What is Strategic sale of PSEs? What is the policy change...