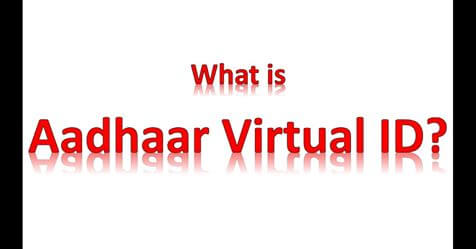 The UIDAI released the concept of a temporary, 16-digit Virtual ID (VID) that can be used by Aadhaar card holders for authentication purposes. In the case of the VID, instead of the Aadhar number, users can provide the temporary 16-digit number for verification purposes in banks, financial institutions etc. Authentication means the user’s identity is verified by a service provider like a bank.

Features of the VID are:

According to the UIDAI, the Virtual ID (VID) will be a temporary, revocable 16-digit number used for Aadhaar card authentication. As a random 16-digit number, the VID verifies the biometrics of the user along with limited details including name, address and photograph. Getting only relevant data will help to protect privacy and reducing the risk of exposing collective details of individuals to service providers.

The authority will start accepting VID from March 1, 2018 onwards. It will be made compulsory for all agencies undertaking authentication from June 1, 2018.

According to the UIDAI, the ID can be generated as many time as possible and users can change the VID as well.

The virtual ID will eliminate part of the security risks posed by Aadhaar ID. Here, the VID comes as a new way to secure biometric details of the citizens. Effort for VID is a good step in the context of alleged Aadhar data breaches. According to UIDAI Ajay Bhushan Pandey, the VID is an “extra layer of security” for the approximately 120-crore people who were issued Aadhaar numbers.

According to the Authority, “VID, by design being temporary, cannot be used by agencies for de-duplication. VID is revocable and can be replaced by a new one by Aadhaar number holder after the minimum validity period set by UIDAI policy”.

On the flip side of the move, several technical experts point out that already, most of the people have submitted their Aadhaar numbers to various service providers. The step will be effective if the government compels the stopping the entities for using the Aadhaar number, instead making mandatory use of the VID.