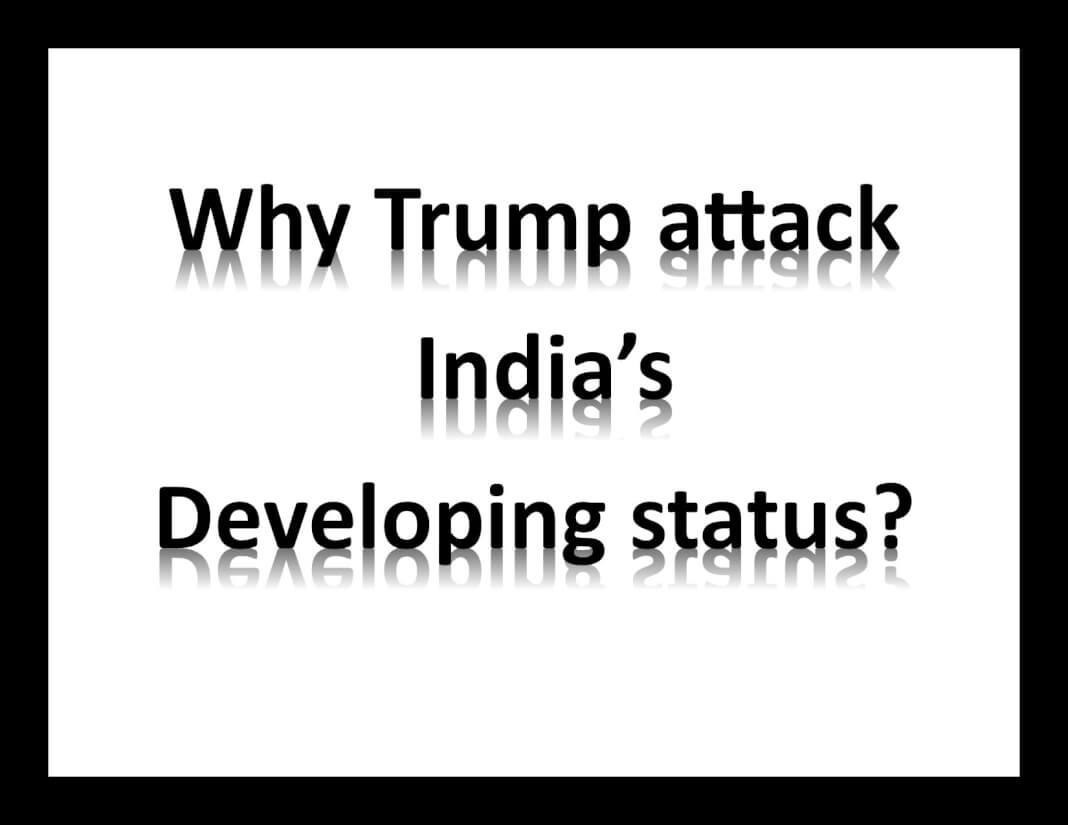 What is Trump’s intention?

Trump like to make bilateral trade engagements with trade partners including China and India. Here, the US President hopes that he will get an upper hand given the economic size of the US and its consumption or import ability.

For having bilateral agreement, the already signed multilateral commitments under WTO are a barrier for Trump. So he ridicules the WTO frequently and warns that the US will come out of that as the WTO is causing ‘losses’ to the US.

What is Trump’s contention on developing country status for China and India?

Trump rates India and China as grown up countries by looking at the GDP size. He accuse that the WTO gives undue favour to the big developing countries. But in terms of Per capita income, India is very poor.

What are the steps taken by the Trump administration to fight India’s developing country status?

The fight of the Trump administration is not limited to words. Rather, it is working hard on several fronts – bilaterally and multilaterally to phase out developing country status to India. On the bilateral side, it has stopped concessional treatment to Indian exports.

On the multilateral front, the US has initiated couple of moves in the WTO to eliminated concessional treatment to India. Following are those steps taken by the Trump administration on India’s developing country status.

1. Removal of the GSP concession to India

Trump administrations’ determined move to phase out Generalised System of Preferences is not an end but a means.

Here, it is pursuing an even bigger goal- ending the multilaterally assigned developing country status to India.

After announcing the end of GSP benefit for India, Trump came straight on the core issue: “It is appropriate to terminate India’s designation as a beneficiary developing country.”

The main form of benefit for a developing country in the WTO is the Special and Differential Treatment. It is a set of concession including slow tariff reduction commitments, higher time for implementing the trade liberalisation measures etc. Trump’s hate for giving the developing country concession and the Special and Differential Status to India and China was a campaign issue at the last WTO Ministerial Conference held at Buenos Aires last December.

Throughout the WTO discussions, Trump’s assistant – the US trade representative, Robert Lighthizer was attacking India and China for availing developing country status.

“There is something wrong, in our view, when five of the six richest countries in the world presently claim developing country status.” Accused Lighthizer.

The Americans were strategic in depicting India’s richness in terms of size rather in terms of per capita income.

For them, India is one of the largest economies in the world and they forget that India holds the largest number of poor people in the world. Similarly, India’s per capita income is one of the lowest.  India is ranked 123rd in terms of per capita income though it is the third largest economy in terms of purchasing power parity GDP.

The US is arguing at the WTO that all countries with a trade share of 0.5% and higher should not be considered as developing country. India’s trade share is 1.7% in global merchandise trade.

3. US stopped other concessional duties for India’s exports

4. US complaints on India’s export subsidies at WTO

In another move the US in 2018, sued India in the WTO for providing subsidies to the export sector. The US administration argued that since India’s per capita income has crossed $1000, the country can’t give export subsidies.

Trade analysts predict an easy victory for Trump’s stand on export subsidies though India’s Ministry of Commerce is redesigning the EXIM policy to make the correction.

What other rich countries say about the developing country status of India?

Trump’s demand has got some sympathy in the advanced world. The EU in its reform package on WTO, suggested that the WTO should introduce “differentiation” among developing countries to decide who can avail of special and differential flexibilities on a case-by-case basis.

Special and differential treatment (S&DT) allows countries to adopt trade liberalisation in a slow manner under the WTO framework.

Countries including India and China enjoys the S&DT whereas there is high level of concessions for the least developed countries.

India also made its own initiatives to protect the developing country status. As part of this, India hosted a WTO mini ministerial meeting at New Delhi in May 2019. The meeting got an agonisingly low level of participation.

Several of the developing countries were participating a plurilateral meeting convened by pro developed bloc on ecommerce that was attended by 77 countries.

At the New Delhi mini-Ministerial, 22 developing and least developed countries participated. But the combined declaration demanding Special and Differential Treatment was signed by only 17 participants and the notable non-signatories were Brazil and Argentina.

With Trump on aggression, India has to spend considerable energy to earn each and every penny through trade. There is no other option as well because we have entered the era of protectionism and economic nationalism. The world has changed; so are rules and regulations for international trade.

What is the Greenfield versus Brownfield FDI debate?

What is Insolvency and Bankruptcy Code 2016?