Home Classroom What is Zombie Banking? 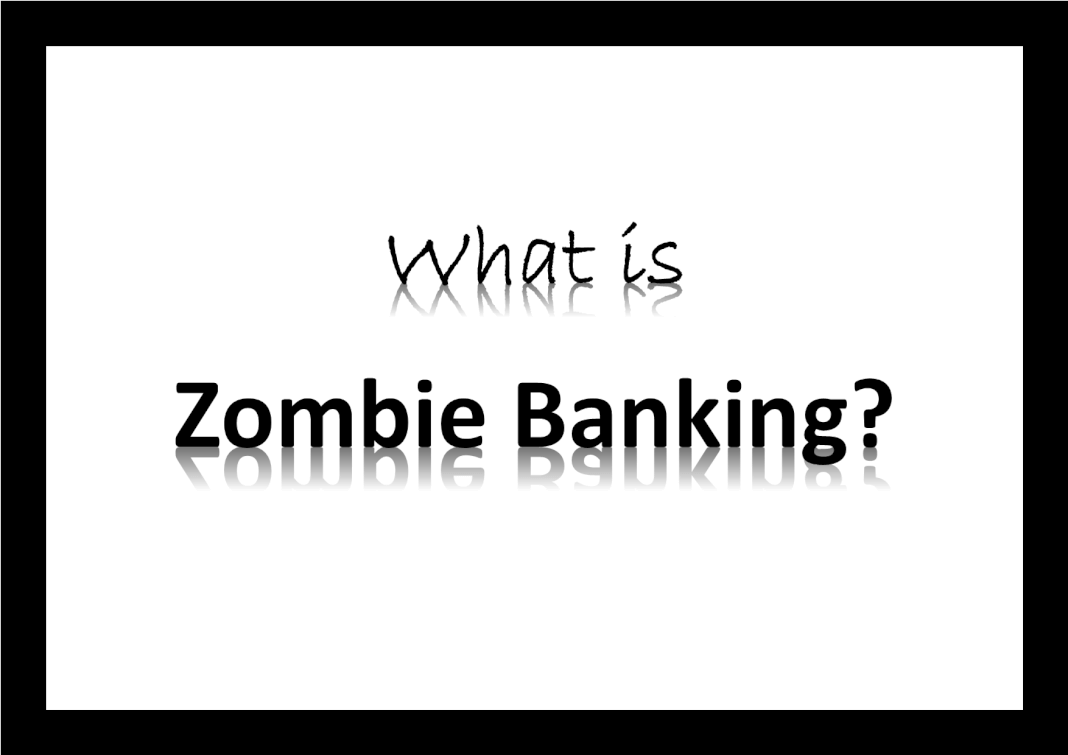 When too many of a bank’s customers are falling into severe indebtedness, the bank will also fall into insolvency (a situation of assets lower than its liabilities). Actually, it is the health of the borrowers that determines the health of the bank.

Interestingly, an insolvent bank has a tendency to continue to give loans to debt trapped borrowers to show that everything is OK. Doing so, the bank is hoping for an improvement of the situation of its borrowers. Here, the bank is hiding the truth to escape from the punitive actions of the regulator (Central Bank).

This type of gamble in lending despite financial weakness is called “zombie lending,” “evergreening,” “forbearance lending,”.

What will happen if many banks engage in zombie lending? Of course, it will lead to flow of credit towards debt ridden borrowers and as a consequence, banks may go bankrupt.

This will leave damaging consequences on the economy in the form of reduced credit in the future and loss of a bank in the system. A large number of such zombie banks indeed brings the economy into a halt.

We can be straight. In our country, over 90% of the NPAs (nearly Rs 9 lakh crores) are in the balance sheets of Public Sector Banks and several of them are undercapitalised besides registering losses.

What is Zombie banking?

A Zombie bank is a bank that is practically insolvent but continues to exist through hiding bad loans on their balance sheet. The bank can continue its operations by rolling over bad loans instead of writing them off. This process is called as forbearance lending or zombie lending.

Daniel Willam gives this definition of zombie banking: “In simple terms, a zombie bank is a bank with bad loans on its balance sheet that would be insolvent if it had to recognise the true extend of losses from its bad loans.” – (Daniel Willam, Zombie Banks and Forbearance Lending: Causes, Effects and Policy Measures, 2014).

An early history of the appearance of zombie banking traces back to the Japanese banking crisis of 1990s. In japan, several banks failed in that period to produce what policy makers called the lost decade for Japan.

Later, zombie banking returned with the global financial crisis with several banks were allowed to live without health in the US and Western Europe. Governments supported many such banks with money, and they came back.

Researchers – Caballero, Hoshi, and Kashyap (2008) argue that keeping zombie banks alive prevented entry of more efficient ones and caused the ‘lost decade’ of growth in Japan.

What has to do to terminate zombie operations? Policy makers assert the best way to treat zombies is to terminate their working.

Non-treatment of zombie banks will produce bigger financial catastrophe as banks are extending risk and continue to give loans to failed businesses.

Such continued lending by the bank to the crisis ridden business entities is called forbearance lending.

What Is Forbearance? What is forbearance lending?

From the financial angle, forbearance is allowing postponement of payments. Here, a lender (bank) allows a borrower to temporarily stop or suspend payments of the loan.

Forbearance lending is a major practice followed by zombie banks as an effort to extend loan time to their clients. By doing so, banks hope that the borrowers can get more time to repay the loan by engaging in their business.

How zombie banks can continue?

(a) Fiscal means eg., via subsidies or tax concessions (and government sponsored capitalisation);

(b) Indirect support, eg., by easing competition for the organisation through administrative restrictions on competitors; and

(c) Credit provided to the institution.

Zombies create ill effects on the rest of the economy. The BIS (Bank for International Settlement), observes that zombies are less productive. They crowd out (depresses) growth of the more productive firms by locking money (so-called “congestion effects”) in inefficient firms (loans not returned).

Zombie banking in the Indian context

The concept of zombie banking is appealing in the Indian context as large numbers of public sector banks are having big NPAs. Of course, it is inappropriate to identify the low capitalised, high-NPA Pubic Sector Banks as zombies given their status quo of sovereign ownership.

Still some of the public sector banks are engaged in significant lending despite weakening fundamentals and deteriorating creditworthiness of their borrowers.

Interestingly, the large borrowers (with loans above Rs 5 crores) contributes to 84% of the Gross NPAs of the banking system as on September 2018 (RBI Financial Stability Report, December 2018).

RBI’s Deputy Governor, Viral Acharya traces the appearances of zombie banking in the Indian context indirectly in an article*.

According to Acharya, “without appropriate supervisory constraints in place, such banks are in a position to delay the recognition of losses and engage in ever-greening or zombie lending, which is essentially the rolling over of debts of unviable borrowers that would have otherwise defaulted.”

The government has made several efforts including recapitalisation to rehabilitate the PSBs. Earlier, 11 out of the 21 PSBs were categorised under the RBI’s PCA framework though capital injection reduced the number to six.

The PSBs have to improve their financials as early as possible to get back to health and profitability.

What are the initiatives for providing clean energy to rural masses?

Why we need a Public Sector Asset Rehabilitation Agency (PARA)?