Home Classroom Slowdown and the Stimulus – the complete guide

The Indian economy is in the grip of a deep slowdown. We faced this type of an adverse environment during the time of the global financial crisis (2008-09). Now, over the last couple of years, what we are experiencing is falling economic momentum that is visible from almost all sectors of the economy.

Declining investment, falling sales, stagnation in employment, poor credit growth -all tells the different sides of the slowdown trend. We can sense the fall of economic activities from the real estate sector as well.

The final outcome of these downward factors is that they have brought down the GDP growth rate. GDP growth has been coming down during the last five quarters.

There is no disagreement that the economy is going through a tough period and symptoms of an uptrend seem to be far away.

The slowdown is not a domestic phenomenon, rather most of the world economies are facing the syndrome.

We have to analyse the nature and causes of the current economic problem that we are in.

Technically, the current situation can be described as a severe slowdown and not a recession. To understand it, we have to go through the definitions of both terms.

A recession is a decline in real Gross Domestic Product for two or more consecutive quarters.

So, recession is declining economic activity measured by contraction of GDP for two or more successive quarters. It is not just declining GDP growth but declining GDP itself – that is the difference. Decline in GDP happens when the economy registers negative growth rate.

For India, the GDP is not coming down or not undergoing contraction. Rather, it is growing but the rate of growth is declining.

A well-known US research entity – the National Bureau of Economic Research (NBER)- defines recession as “a period of falling economic activity spread across the economy, lasting more than a few months.”

In the past, several developed economies have registered recession. The US economy recorded recession in 2005 and 2008. At present, economists warn that the US is moving to a recession, powered by trade war.

What is a slowdown?

A slowdown is a situation of declining growth rate of GDP. The economy is moving forward, but its growth rate is falling. There need not be a contraction of GDP actually in the case of slow down.

For India, the GDP growth rate has been falling over the last five quarters. Hence, we can say that the economy is undergoing a slowdown and not a recession.

Table: Example for recession and slowdown

What is the extent of the slowdown for Indian economy?

This question is very important while quantifying the depth of the current economic problem. Recession is typical problem that usually happens to a developed economy. These economies are already grown big and there are limitations for them to grow further. So, they usually face recession. It is a state of contraction of GDP or registering negative GDP growth rate.

But now, the economy is growing at around just 5% with slowing trends in production, employment, demand etc.

Understandably, the slowdown that we are experiencing now is the equivalent of recession experiencing in an advanced economy. The seriousness of the situation is equal.

At the same time, the term slowdown is not enough to explain the grave situation that we are experiencing; it is more than that. The term slowdown is quite generic and loose and doesn’t indicate how deep the problems are. A decline in GDP growth, independent of its gravity is called as slowdown. A fall in GDP growth rate even if for two quarters or ten quarters, is described as slowdown.

Since terminologies are not available enough to explain the macroeconomic conditions of emerging market economies, just we can say that our economy is going through a deep slowdown.

What are the indicators of the ongoing economic slowdown in India?

Now, our economy is not growing at a rate that is the standard for an emerging economy or that justifies its past performance. Following are six important indicators which tells us that the economy is in some sort of a trouble. 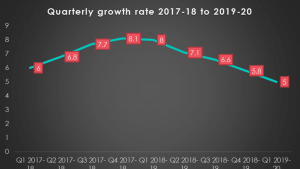 Whenever an economy registers a reduced credit growth, it’s a warning for slowing spending and the resultant reduced growth.

Nearly 45% of the population of India lives in rural areas. Fall in rural income in recent years has led to reduced purchasing power with the rural people.

In recent years, demand for both consumer durables and non-durables have declined because of low purchasing power with the rural people.

The periodic labour force survey concluded that unemployment is rising at a higher rate. This trend is strong in both rural and urban areas. Rising unemployment deprives income of the people and this leads to reduced demand.

In every country, recession and slowdown are highly correlated with the poor performance of the manufacturing sector. Manufacturing or the industrial sector is considered as the economic engine and it can support substantial proportion of the workers. Poor industrial growth shows the depth of the slowdown.

Table: Performance of the core industries in June 2019

Sectors where consumer income is quickly and visibly spent – automobile and real estate sector have suffered the worst in recent quarters. Declining automobile sales and falling real estate prices shows that the slowdown is deep.

Falling sales leaves tens of thousands of employees jobless. This is the leading adverse factor that produces inability of the people to buy goods, reduction in demand, sales, production etc. Once people start to lose their jobs, slowdown spread like a wildfire.

There are some visible domestic and global factors that triggered the slowdown in the Indian economy. Domestic factors can be cyclical issues and structural problems. Global factors are the deepening trade war and fall in international trade.

The structural factors are always there. India’s industrial sector is not progressing at the right pace. The country remains importer of major machineries and electronic goods.

Similarly, Indian manufacturing firms are not having the competitiveness to produce quality components and thus to participate in the global value chain network.

In the case of agricultural sector, the sector was not able to achieve productivity and thereby releasing the unemployed population to the industrial sector.

How structural problems can be corrected to treat the slow down?

Here, the government has to make substantial economic reform to strengthen vital sectors like manufacturing, construction etc. Technology adaptation and productivity expansion are necessary to make our industrial sector competent with the rest of the world. This will take substantial efforts, time and need good institutions.

In the medium term, revival of industrial sector investment, production, employment etc is the best way. All these are closely related or are the same.

Cyclical factors are those repetitively comes. An example is the higher volume of NPAs with the banking system. Without solving the banking sector problems, sufficient delivery of credit to the various sector becomes difficult.

How cyclical factors can be corrected?

Cyclical slowdown can be corrected by stimulating demand. Additional expenditure by the government or reduced taxes etc., can stimulate demand in the economy.

What are the global factors that contributes to slow down in India?

In the global economy, continuation of trade war between the US and China produced uncertainties. Exports are not going up; countries are adopting restrictive policies on imports. Higher crude prices adds to the external sector problems.

Similarly, global capital flows (like foreign investment inflow to India) are coming down fearing a slowdown in the developing world and recession in the advanced world.

Whenever adverse economic situation like slowdown that pinches the economy and starts producing chaos, individuals restructures their activities.

Especially businesspeople and the rich goes risk averse. They will not spend or invest substantially. This of course deepens the slow down.

Following are some of the immediate effects in near future:

These immediate effects may change with the operational factors like  the type of stimulus, the role of global factors and the quickness of recovery.

5. What policies have to be adopted to fight the slowdown?

Slowdown is not due to absence of resources or shortage of labour; but reduced demand in the economy from low income with the people.

For the investors they track demand to make investment and production decisions. When there is general pessimism about future prospects, they hesitate to invest. So, investors are not ready to invest or produce now because of slowing demand for manufacturing items.

Here, the only and the sustainable way to retrack the economy is to improve business sentiments. Higher credit to households, along with increased government expenditure may tempt the business to raise production and investment.

No tax cuts or incentives will be successful unless businesspeople find it safe to invest. In this context, there are three necessary ways for bringing up the business momentum.

6. Whether the government capable to bring back economic momentum or to counter the slowdown?

Given the tax resources and financial capacity of the government now, it is difficult to force back the economy through making government expenditure or tax cut alone.

But given its policy capability, the government can bring back growth momentum through sophisticated policies. Here, it is very important that every government step should nudge the investors and households to spend more.

Remember, a conducive policy may be valuable than millions of rupees worth of tax cut or expenditure commitment by the government. There are two options for the government to manoeuvre the economy in this difficult time.

First, policies like promoting credit expansion by ensuring bank’s health (capitalisation) will raise credit growth. At the same time, it should not be excessively used; otherwise it will raise NPAs further in future.

Second is that the government can launch long term infrastructure investment. This will enhance the flow of money to the economy.

Similarly, it helps the business to reduce their cost of doing business and household to get better living conditions.

B. The Stimulus Measures taken by the government

Till this time (September 21, 2019), the government has launched five rounds of interventions to fight the slowdown. Following table illustrate the measures taken by the government.

The fourth stimulus is extension of credit to various sectors of the economy including MSMEs and NBFCs.

The stimulus interventions have effects on different sectors including, exports, housing, services and corporate investment. Similarly, they may have some tax outgo effect especially the step taken by the government to cut corporate income tax. At the same time, the reduction in CIT will enhance positive investment sentiment in the economy. This is what needed right now stimulate automatic increase in expenditure. 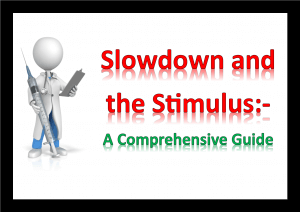 How does the Reserve Bank estimate the amount of new currency...