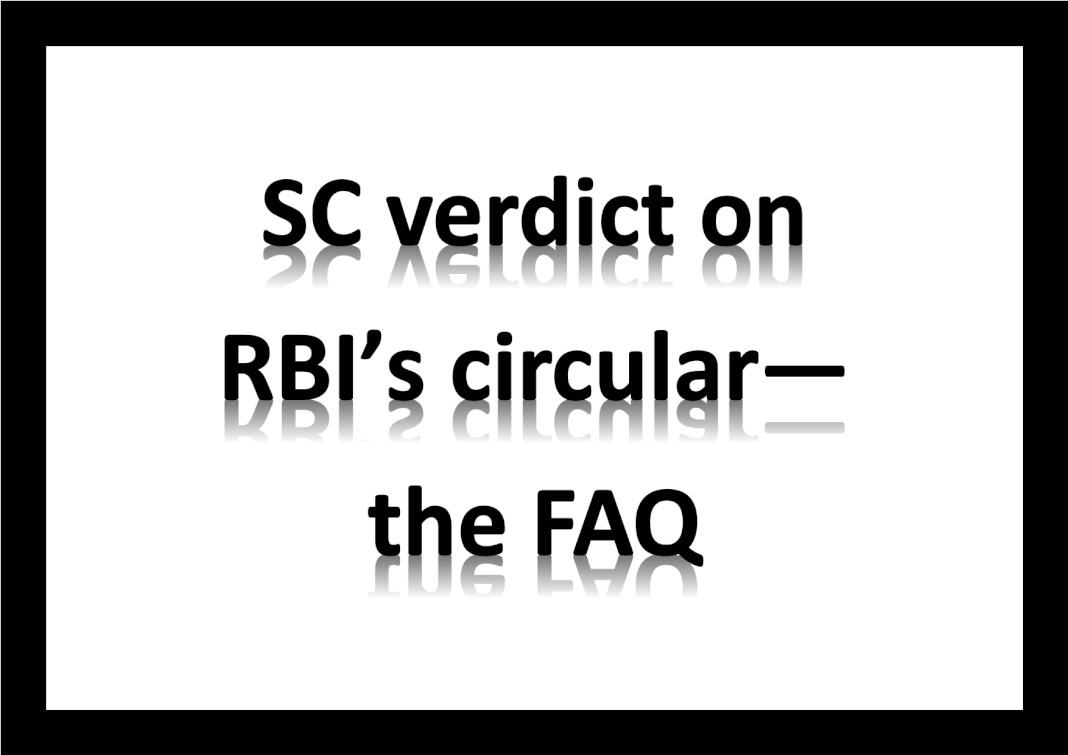 In a verdict that will create long term impact on the management of stressed assets in the country, the Supreme Court in its April 2nd verdict has struck down RBI’s monumental guideline – the revised framework on the resolution of stressed assets.

SC made the verdict after hearing a complaint from the power sector firms (that has loads of NPAs and has to go through the resolution process) about the RBI guidelines.

What was the SC verdict?

“The impugned circular will have to be declared as ultra vires as a whole and be declared to be of no effect in law,” said the Supreme Court in its ruling on April 2nd, 2019.

What is RBI’s revised framework on the resolution of stressed assets?

The revised framework was necessary as several efforts till that date, like the Corporate Debt Restructuring Mechanism, S4A, Strategic Debt Restructuring etc failed one by one in addressing the rising NPA problem in the banking system. More than a dozen measures were launched by the RBI and the government in the past but most of them either failed or not working well.

Stressed assets in the banking system is estimated to be around Rs 10 lakh crores and nearly 90% of them are with the Public Sector Banks.

Under the circular, the RBI instructed banks that all debts with a total debt size of more than Rs. 2000 crore be given 180 days to resolve their bad debts.

After this 180-day timeline, banks will have 15 days to refer the stressed asset case to the National Company Law Tribunal (NCLT) under the Insolvency and Bankruptcy Code (IBC), for invoking insolvency procedures like liquidation.

With the circular, the RBI cancelled four of the existing mechanisms to tackle stressed assets like the Strategic Debt Restructuring Mechanism.

How the RBI got such a power to issue the revised framework?

RBI designed the mighty Revised Framework on Resolution of Stressed Assets on February 12th based upon the powers given by the government through an ordinance.

This ordinance added Section – 35AA and 35AB under the Banking Regulation Act in May 2017. The ordinance was an accessory legislation for the success of the newly introduced Insolvency and Bankruptcy Code 2016.

(i) What power the section 35AA gives the RBI?

It powers the RBI to issue directions for initiation of insolvency in respect of a default.

(ii) What power the Section 35AB gives the RBI?

It powers the RBI to issue directions for resolution of stressed assets in general.

As per the ordinance, the powers under Section 35AA could only be exercised by the RBI on authorization from the Central Government.

After the ordinance, the Ministry of Finance, on May 5, 2017, authorised the RBI to issue directions to initiate the insolvency resolution process regarding default.

Why it the RBI’s resolution framework became controversial?

The Revised Framework became controversial as it contained a strict time line for banks to resolve outstanding corporate stressed assets (NPAs) within 180 days. Or else, banks have to refer the corporate debt for the tough insolvency proceedings under the IBC Act.

An even tougher sub clause in the framework was to treat defaults of even one day to treat as NPAs. Or in other words, a company will be treated as a defaulter even if it missed the repayment schedule even by one day.

Several corporate defaulters who have stressed assets -especially in the power and fertiliser sectors found that they can’t meet the strict RBI guidelines.

More importantly given their weak finances, if they go for resolution process prescribed by the RBI, their companies will be referred for liquidation and this may incur severe loss for them.

How the revised framework on stressed asset management performed in its short span of time?

The RBI issued circular to banks for resolving corporate NPAs that have a size of over Rs 2000 crores. Several cases were referred for resolution and several failed companies were bought by other firms. The Bhushan steel deal, the Essar steel and Binani cement deal were some of them. Still, the time taken was big and only a fraction of the big ticket corporate stressed assets was considered for resolution.

Who were the aggrieved parties that approached the SC and what was their complaint?

SC verdict was after the court filing by power sector companies against the RBI action. Several other firms from the fertiliser sector, infrastructure sector, steel sector etc. stood with the power firms.

What is the implication of the verdict on RBI’s power to issue instructions under the sections?

The Court has held that both Sections 35AA and 35AB are valid.

At the same time, the court observed that the RBI can only direct banking institutions to move under the Insolvency Code if two conditions precedent are specified:

(i) that there is a Central Government authorisation to do so; and

(ii) that it should be in respect of specific defaults,”

This means that the RBI can’t issue general guidelines as put in the February 12th, 2018 (Revised Framework). It can rather issue guidelines on specific guidelines on central government instructions.

SC has not clarified on ground on which specific cases can be considered.

The Court observed that section 35AA sets the boundaries within which the RBI is to act, for making directions in relation to insolvency proceedings.

What is the implication of the Supreme Court verdict?

The one-day NPA norm applied for resolution is cancelled: the controversial element of the revised framework was the a one-day default NPA rule — a company was treated as a defaulter even if it missed one day of the repayment schedule. With the SC intervention this one-day NPA rule stands cancelled.

Most stressed sectors where only liquidation is the probability gets relief: The NPAs under the power, sugar and fertiliser sectors will go as usual and can’t be treated through RBI circular.

How the verdict is going to influence the resolution process in the country?

The verdict may delay the resolution and insolvency proceedings and may be an unintended setback for the resolution of stressed assets. The country has to wait long for a solution to the hurting NPA problem.

What is RBI’s response to the verdict?

Governor Shaktikanta Das in a note at the RBI website highlighted that the powers of RBI under Section 35AA and other sections of the Banking Regulation Act, 1949 remains intact. The Governor also mentioned that in the light of the verdict, the RBIL will take necessary steps, including issuance of a revised circular.

How Budgetary items are classified?

What are Cash Management Bills (CMBs)?