SDG (Sustainable Development Goals) India Index is an index prepared by the NITI Ayog to measure the progress of the country and that of individual states based on the United Nations initiated Sustainable Development Goals (SDG). The purpose of the NITI Ayog index is to estimate the progress of Indian states and UTs through a single measurable index that would serve as policy tool and initiate action at the State level.

The Sustainable Development Goals initiated by the UN in 2015 and ratified by 195 nations have 17 Goals, 169 Targets and 306 National Indicators.

India’s progress in SDG is important at the world level because of two factors. First, the country bears nearly one-sixth of the world population. Secondly, the country’ has to make tremendous improvement in these goas as the development level is quite poor.

NITI Ayog’s effort is to track the progress of India on these goals so as to measure and incentivise states and UTs so that India can achieve the target by 2030.

Here, to measure the progress on SDGs, the NITI Ayog’s SDG India Index gives an idea about the achievements made by states and UTs on different dimensions of Sustainable Development set by the SDG.

Upgradation of the SDG India Index for 2019

The SDG India Index 2019 is an upgradation of the previous index that was published in 2018.  In the case of SDG India Index 2019 (SDG II 2.0), the index tracks progress on all the 17 SDGs and the set of 169 targets for measuring SDG progress of all the States and UTs. Index estimation for the first 16 goals were based on quantitative data whereas qualitative data was used to measure the progress on the 17th goal.

SDG India Index was first prepared for 2018. It covered 13 goals covering 62 indicators. Four of the goals were not covered due to inadequate data on these targets at the state level. Hence, the SDG India Index 2019 is an improvement over the 2018 edition.

According to the NITI Ayog, “The SDG India Index is intended to provide a holistic view on the social, economic and environmental status of the country and its States and UTs.”

The index score ranges between 0 and 100 for each state/UT based on its performance in 16 SDGs.  If a state achieves a score of 100, it signifies that the state has achieved the national target set for 2030.  Higher score indicates closer to the 2030 SDG target. On the other hand, if a state achieves 0, it is a worst performer.

The SDG  India Index 2019 score for SDGs 2030 ranges between 70 for Kerala and 50 for Bihar. The all India score is 60. As per the 2019 Report, Kerala retained its first rank among states.Among the UTs, Chandigarh is a front runner with a score of 68.

Performance of states shows that there is notable regional differences. Southern states led by Kerala are far ahead as a region whereas good performance by Himachal Pradesh is a model for northern states to emulate. All of the five southern states come under the top six ranks or in other words, five of the top six achievers are from South.  Compared to the Southern states, North, Central and North-Eastern states have to make significant progress towards SDG.

As per the 2019 Report, there is no aspirants (score of below 50) and achievers (score of 100). Seven states including Kerala and Himachal Pradesh are front runners whereas 21 states are performers.

NITI Ayog has used the MoSPI’s (Ministry of Statistics and Programme Implementation) National Indicator Framework to prepare the index and also consulted with Central Ministries/Departments and States/UTs.

The major utility of the index is that States and UTs can evaluate their progress against the national targets and similarly compare performance of their peers. They can understand the reasons for differential performance and adopt strategies to achieve the SDGs by 2030. 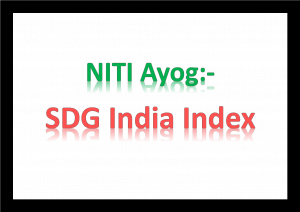 What is IMF’s Fourteenth Quota Reform?