Home Main When trade war heats up as a real war 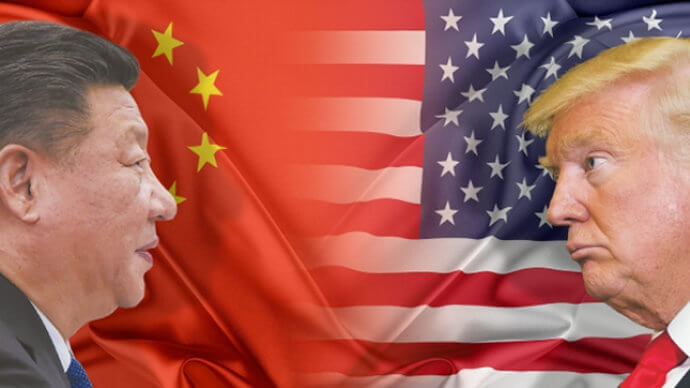 The US President Donald Trump is always unpredictable. Now, in the latest move, Trump raised tariff on $200 bn value of imports from China to 25%.

Both countries are understandably not ready to give up at discussions and the trade war is well reflecting the political and strategic rivalry between the rising power and the superpower.

More hurting is the step by step blows by the world’s top two economies is continuing amidst discussions.

Expert already warn that the trade war will adversely affect the world economy and is the biggest threat after the global financial crisis of 2008.

The US under Trump has been raising protectionist measures against friends and foes on three channels. First was the steel and aluminium tariff on security grounds. The second was safeguard measures on Solar Panel imports and washing machines. These two measures were mostly against both friendly countries.

But the third one ie., against China on intellectual property and forced technology transfer grounds, is more devastating as it affects sizable portion of the US trade and the tariff levels are high.

The tussle with China is a higher order one and is an intensive conflict. Tariff were imposed based on what the US calls unfair intellectual policy and practices followed by Beijing. Trump already announced tariff on $250 (in two phases: $50 bn plus $200 bn) worth of Chinese goods accusing that China has violated intellectual property rules and is adopting forced technological transfer.

Previously, when Trump imposed 25% tariff on Chinese imports worth $50 bn; the world found it as a token step. Yet again, when he slashed 10% tariff on $200 bn imports that was taken as a threatening step.

And there is a marked difference in the latest US move; that is the Chinese retaliation is weakening. Beijing made equal tariff exchanges in the first two phases and came out with a tariff rate of 25% on $60 bn imports from the US.

But China is more determined and centrality of decision making without being accountable as in a democratic set up will give more space to the Chinese leadership in designing the response.

Chinese society also feels that the present conflict with the US is inevitable in the context of the rise of the Chinese nation.

Continuous use of Section 301

One leading feature of Trump’s Trade war is constant use of US trade laws to impose tariff on the rest of the world. Section 301 was reactivated and has been made as the legitimacy deriving law that support tariff imposition.

Section 301 was a pre-WTO era law created by the US to made sanction against other countries. With the creation of the WTO and the Dispute Settlement Mechanism, Section 301 was not used.

But Trump reactivated Section 301 after ensuring that the WTO’s Dispute Settlement Mechanism is not working.

Using the protectionist laws, over the last couple of years, the USTR has brought out half a dozen reports indicating trade violation form China and other trade partners. They have made self-investigations without getting complaints from industries.

All the developments indicate that trade war is intensifying rather than dying out. Trump is not bothered about market and the stock market across the world is on a downtrend.

At the same time, he is pacifying the domestic losers of trade war by declaring subsidies to the farmers.

What fuels trade war is the rapid stride made by China in consolidating its global position in several fronts. The Belt and Road Initiatives has won the hearts of several European countries. Many European tech firms were either taken over by Chinese firms. Similarly, several western firms are engaging fiercely with the Chinese market.

More commendable is the technological transformation brought by China on several fronts. From one field to the other, China is challenging the US, and hence a conflict between the two becomes inevitable. Trade war just a medium for delivering that conflict.

Talks between China and the US is continuing. But the past experience shows that Trump can’t be charmed out in front of a conference Table. He may just declare a truce in international meetings and takes even tougher steps when the returns to the US. This has happened in the last G20 meeting as well.

The world can witness more exchanges between the two super-powers in the near future; that may bring further damages to the already weakening global economy.