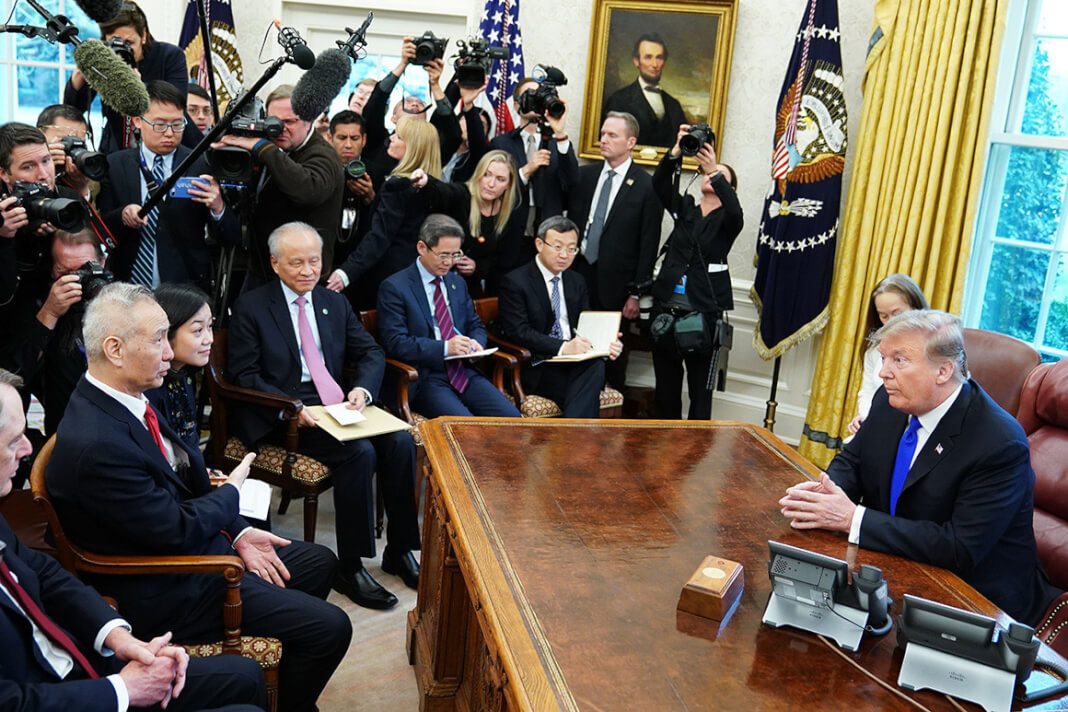 The US and Chinese negotiators are heading towards a deal to end their trade war engagements. As per indications on Friday, President Trump is going to extend US sanction against China by few days to get into a final negotiation.

At the end of the normal trade round, Trump said that there was “a very good chance” for the deal and he is readying to extend the March 1st tariff deadline imposed on Chinese imports into the US. Negotiators hinted at the potential meeting between Trump and the Chinese President Xi Jinping.

Reports indicate that over the past week, the US and Chinese trade negotiators made their last round of negotiations and it will be extended by two days till Sunday, 24th. Chinese side was led by the Vice Premier Liu He.

The Chinese Vice Premier said he believed a deal was “very likely”, and hence extended his trip to Washington to continue negotiations.

Extension of the tariff time line is a good sign for a final deal according to trade experts.

Few months back, the trade war started with the US raising tariff to 25 percent from 10 percent on $200 billion of Chinese imports into the United States. China retaliated with a set of tariffs on imports from the US and further exchange tariff between the world’s two largest economies occurred.

As per the current trade agreement, the content of the agreement between the two side is not known.

Negotiators indicated about exchange of concessions including Chinese commitment of imports from the US to $1tn. There is also a currency agreement that aims at stopping undervaluation of the Yuan.

Mr Trump on his side indicated that he is going to soften the action against Chinese telecom giant Huawei. Huawei was facing action in the US following national security concerns by the US.

Reports indicate that a currency deal is already on the card between Washington and Beijing. President Trump and Treasury Secretary Steven Mnuchin said the two sides had reached an agreement on currency. There are no details of the agreement.

The US was accusing China as a currency manipulator and is pointing that Yuan remains an undervalued currency thereby giving a trade advantage to China.

The excessive yuan depreciation has helped Chinese exports to overcome the tariff imposed by the US.

Divergence in other areas

But a solution to one of the main US allegations – forced technological transfer by China; is yet to be reached by the two sides as per reports.

The US accuses that foreign firms in China are often forced to transfer their technology to Chinese firms to operate there. China denied this charge.

Other areas of divergence on the potential trade agreement is also substantial.

According to Myron Brilliant, who heads international affairs at the US Chamber of Commerce, told reporters: “The two governments are working hard at turning working-level discussions into meaningful text. But there are still gaps that remain on forced technology transfer, digital trade and data flows.”

At the beginning of the negotiations, both sides were adamant.

The US side demanded structural changes in Chinse economy to bring better trade engagement. These demands were incorporated under six memorandums viz; cyber theft, intellectual property rights, services, agriculture and non-tariff barriers to trade, including subsidies.

The Chinese side disagreed with the language of the memorandums

Further negotiations on these issues are expected in the immediate future according to US trade officials.