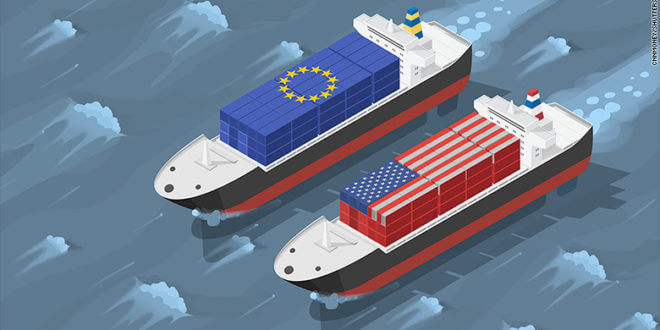 As the US President Donald Trump is forcing his own style of economic engagement on the rest of the world, a representative meeting of the West took place at Washington. The unusual trilateral meeting of the trade officials of EU, Japan and the US was held on August 24th at Washington.

The mission of the meeting was to fight the allegedly unfair trading practices by unspecified “third countries”.

Financial Times quoted an EU trade official about the sentiment of the meeting -“There’s no secret that we think China is a big sinner here.”

Equally, it is no secret that Trump is winning hearts in Europe. Some analysts see scope in political realignment in favour of the US Presidents’ policies.

The EU is critical of the Chinese method of capturing control of critical European tech companies. They feel that the takeover of the German robotic firm Kuka is symbolic of the Chines approach.

China’s industrial robot output gone up by 68 per cent in 2017, boosted by the ‘Made in China 2025’ program which seeks to develop indigenous technology on key sectors.

Europe has also opened their eyes to Trump’s ‘sticking to the basics of economics’ style policies that has started dividends on the US economy. The US economic growth has soared to 4.1% in the second quarter of this year.

Trump’s admirers believe that this is the second longest period of economic growth since World War II.

Even bigger is its political achievement after deducting the deal breaker image that Trump has earned while stretching international accords and institutions.

If Europe is fascinated by the idea of ‘no trade if no benefit’ and give its heart to Trump way, China can expect a bigger resistance.

The latest gathering by the Western economies cane be viewed as a beginning of a reinforcement against China.

In the last few years, policy makers in the West have agitated that trade has deviated into ‘one man taking all’ situation. They have developed an underlying notion that international trade benefited only one country and eroded wealth of the West.

The EU and G7 were noticeably silent on protection of free trade in their last few summit declarations. Rather they stressed ‘trade that benefits all’.

Trump since his start; is consolidating his policy platform. The US was aggressive on its trade partners who enjoyed a trade surplus with US. Friends and foes were forced to work on US demand to cut deficit. Washington compelled allies like Japan and Mexico to renegotiate. Most importantly, Trump has no respect to the multilateral agreements that his predecessors signed. Rather, the US President is adopting a bilateral approach in trade engagement.

The Washington meeting is a boost for Trump before launching bigger steps in his trade war on China.

Centre proposes States to use Aadhaar for welfare schemes