Home Classroom What is US Fed’s tapering and what are its effect on India?

The leading factor that is going to direct stock market trends in the coming months is the US Federal Reserves’ steps to withdraw its monetary stimulus. The US Fed has launched a monetary stimulus programme in the name of Quantitative Easing (QE) that was launched in March 2020 to inject liquidity into the US economy in the context of the covid pandemic created economic shock.

Under QE, the Federal Reserve has been buying bonds worth $120 billion each month from March 2020 onwards. When the Fed buys bonds, money flows to the system. On the other hand, bonds go to the Fed. Now, the purpose of QE is to ensure money flows into the system so that the economic agents are encouraged to spend more. Adequate cash in the system will tempt entities to spend more and thus may stimulate the economic activities.

What is Quantitative Easing (QE)?

Central banks are known for their innovative steps to support the economy especially during crisis. One such instance was the Global Financial Crisis of 2008 where the Federal Reserve bought large quantities of bonds that caused the supply of more money into the system. This is action of the central bank is known as Quantitative Easing.

Quantitative Easing (QE) is the central bank programme of purchasing securities to reduce increase money supply, reduce interest rates and to encourage consumption and investment activities in the economy.

Along with the bond purchase, the Fed also cuts its policy interest rate or what is called the Fed rate. It is like the repo rate in India. Hence, the intervention of the Fed is double edged. On the one hand, it buys bonds from financial institutions while transferring money into the system. This increases liquidity or money supply. On the other side, the Fed reduces interest rate. As a result, the overall interest rate in the economy may come down.

We found that the bond buying programme is called quantitative easing. Higher purchase of bonds will reduce the bond yield and thus indirectly contributing to downward pressure in market interest rate.

Now, for the act of unleashing money into the system it can’t be done limitlessly. The Fed should stop the programme of purchasing bonds and thus injecting money into the system. Remember nearly $120 billion has been added every month from March 2020 onwards. The impact of such a monetary injection is not limited to the US economy. The US investors take such funds into other financial markets to buy shares and bonds. For example, the surge in the indian stock market in recent quarters is notable.

As an effort to put an end to the supply of additional money, the Fed tries to exit from its QE in a slow manner. All of a sudden it can’t stop injecting liquidity. The exit from such an injection manner will be done by reducing the injection amount per month. Hence, the Fed decided to reduce the bond purchase by $15 billion every month (from the monthly purchase of $120 bn). In this way if this reduction in bond purchase starts in December, it can bring down the bond purchase to zero per month by July 2022. This process of slowly reducing the monthly bond purchase programme (or injecting liquidity into the system) is called tapering.

The effect of the actions of the US Federal reserve was strongly visible in 2013 when the Fed made a sudden exit announcement from the QE. Almost all stock indices crashed and EME currencies witnessed sharp depreciation. After that event, the Fed is announcing its policy decisions in at slower pace so that the financial markets across the world can absorb the decision without any shock. This time in November, when the Federal Reserves meets to decide about the launch of tapering, it is expected that EME stock indices and currencies may witness strong fluctuations. 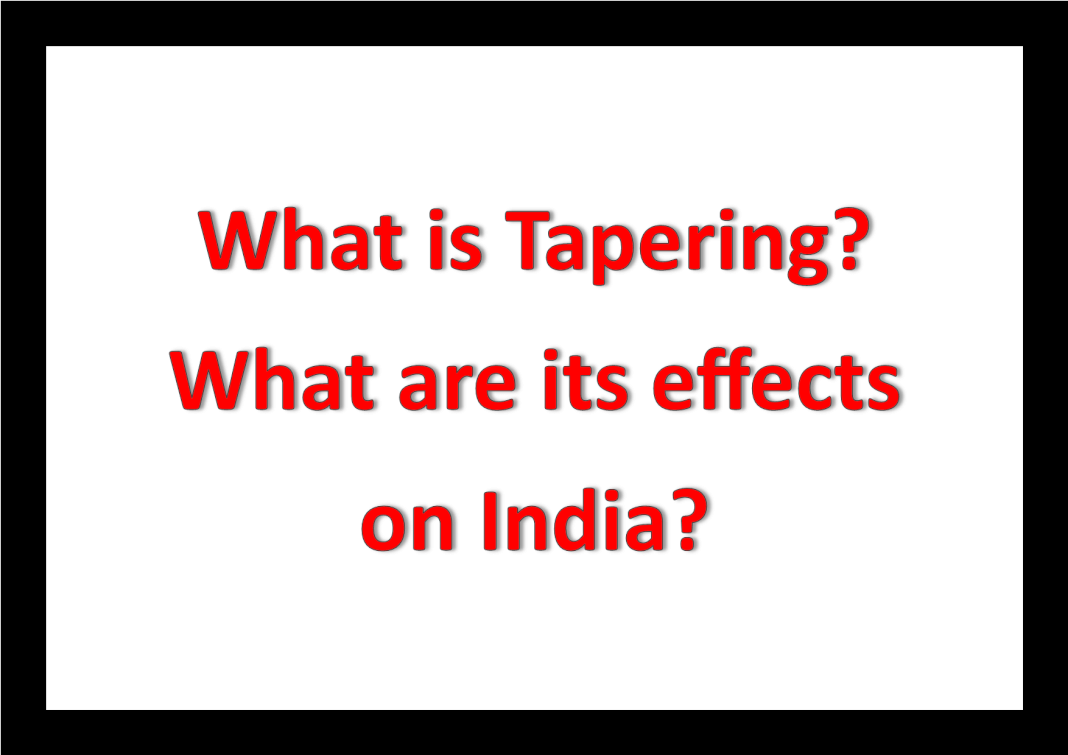 What is the difference between Nominal Interest Rate and Real Interest...

Nobel Prize in Economics 2019 -Why this poverty study is unique?