What are extra budgetary borrowings?

According the budget document, “Extra budgetary resources (EBRs) are those financial liabilities that are raised by Public Sector Undertakings for which repayment of entire principal and interest is done from Government budget,”

Such borrowings are made by state-owned firms to fund government schemes but are not part of the official budget calculations.

Extra budget borrowing is excluded from the fiscal deficit calculations, but at the same time, are added to the total debt of the government.

In recent years, several CPSUs have raised resources from the market by issuing Government of India-Fully Serviced Bonds (GoIFSB) for which the repayment of both principal and interest is to be done from the Budget.

As per the government data, at end-March 2019, total outstanding liabilities on account of EBRs were 0.5 per cent of GDP and it is expected that by end-March 2020 they may rise to 0.7 per cent of the GDP.

Use of the extra budget borrowings

Main entities that have borrowed are FCI, National Highway Authority of India, National Bank for Agriculture and Rural Development (NABARD), which has borrowed for both rural development and irrigation projects. Similarly, Housing and Urban Development Corporation (HUDCO) for housing projects and Rural Electrification Corporation (REC) for electrification projects have also added to the extra budget borrowings.

In the same way, several state entities have also made extra budget borrowings. An interesting example is the Kerala government owned KIIFB that borrowed through issuing Rupee Denominated Bonds.

CAG on off budget expenditure

The Comptroller and Auditor General of India has raised concern about rising off budget borrowings. “Government has increasingly resorted to off-budget financing for revenue as well as capital spending. In terms of revenue spending, off-budget financing was used for covering deferring fertilizer arrears/bills through special banking arrangements; food subsidy bills/arrears of FCI through borrowings and for implementation of irrigation scheme (AIBP) through borrowings by NABARD under the Long Term Irrigation Fund (LTIF).” – CAG.

The Fifteenth Finance Commission in its initial report advised both the centre and the states to eliminate extra budget borrowings.

The Commission noted that there is increasing tendency of the Union and State Governments to borrow outside the Consolidated Fund, leading to accumulation of extra-budgetary liabilities.

Hence, the Commission recommended that in the interest of transparency, both the Union and the States have to make full disclosure of extra-budgetary borrowings. Outstanding extra-budgetary liabilities need to be clearly identified and eliminated in a time-bound manner as per the amended FRBM Act of 2018. 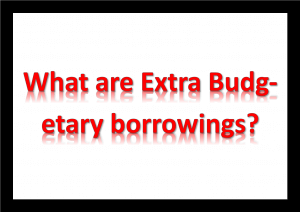 What is current account deficit? What are the features of India’s...