Home Classroom What is the escape clause of the FRBM Act?

What is escape clause?

While crossing the prescribed target, the government has resorted to the concession allowed for it under the FRBM. This concessional provision to go above the allowed fiscal deficit target is popularly known as the escape clause.

The Fiscal Responsibility and Budget Management (FRBM) Act was passed in 2003 and it sets the fiscal rules to be followed by the government to ensure fiscal consolidation.

In 2018, the Act was amended after a review of the Act made by a committee under Dr NK Singh. The committee suggested several measures; but decisively the committee observed that adhering to fiscal discipline based on target reduction of the fiscal deficit will be good for the government and the economy in general. Overspending causes economic disturbances.

Grounds for the use of the escape clause

The subsection 4 (2) of the Act says about various grounds on which the FRBM’s fiscal deficit target may be exempted during a year.

Exceeding annual fiscal deficit target due to the following ground or grounds may be permitted:

(i)  national security, act of war,

(iv) structural reforms in the economy with unanticipated fiscal implications,

(v) decline in real output growth of a quarter by at least three per cent points below its average of the previous four quarters,

The provision that describes about the procedures to be followed in such situations is inserted under Section 4 (5) of the FRBM Act.

In the budget 2020, the revised statement for 2019-20 gives a higher fiscal deficit than the target allowed under the FRBM. Here, for the year, the fiscal deficit target was 3.5% of GDP. The revised estimate shows fiscal deficit of 3.8%. Hence, the escape clause has been used understandably and the government made an explanation about that in the Medium-Term Fiscal Policy Statement.

The government’s statement for the deviation and thus the use of the escape clause is as follows:

Hence, it is implied that for 2019-20, the fiscal deficit target is exempted because of the structural reforms undertaken in the form corporation tax reduction. The budget also hints that the same escape clause may be used for 2020-21 as well. 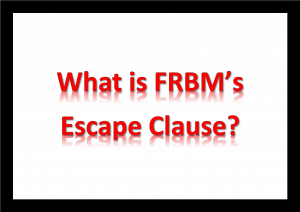 What is National Statistical Commission (NSC)?

Why the new Capital Goods Policy is important for India?