Finance Minister Ms Nirmala Sitharaman announced a third booster package to the slowdown hit economy. The package covers two critical sectors – the export sector and the housing sector. For those two sectors, the government aims to make a spending of around Rs 60000 crores. A portion of this amount is already on the card as per the existing schemes of the government (MEIS). Following are the main measures announced by the FM for the export sector.

Incentive for the housing sector

The second component of the incentives goes to the housing sector. Here the government declared three types of stimulus measures – a stress fund for stalled projects, liberalising ECB norms for affordable housing schemes and equalising the interest rate of House Building Allowance to the yield of 10-year government bonds.

The substance of the third stimulus package is that it addresses the declining export problem and at the same time trying to stimulate the real estate sector which is the triggering sector for economic revival. 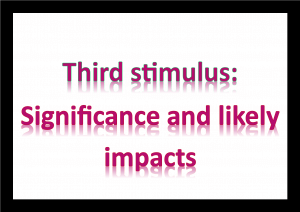 What is National Investment and Infrastructure Fund (NIIF)?

Why are the yields of government securities rising?