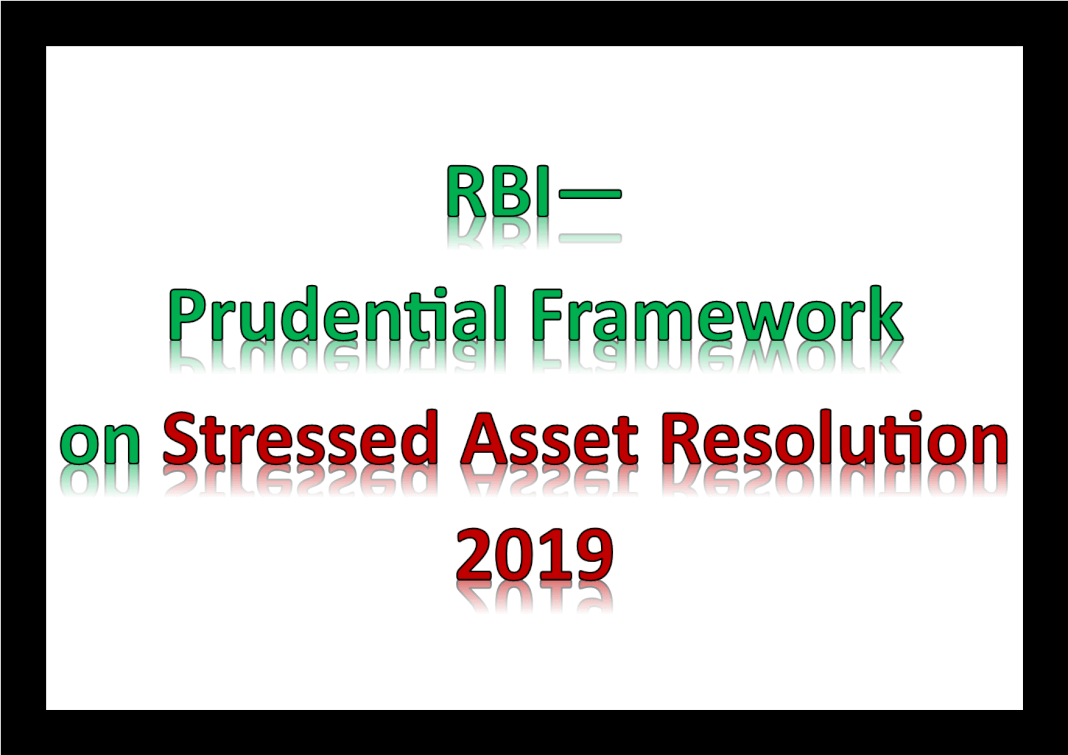 The Reserve Bank of India has come out with an updated guideline about resolving stressed assets on 7th June 2019. Revision became necessary after the Supreme Court  struck down the existing guidelines by the RBI in April this year.

The new guideline on resolution of stressed asset is called Prudential Framework for Resolution of Stressed Assets Directions 2019.

It is a set of guidelines to banks for tackling their stressed assets.

Significance of the Prudential Framework is that it replaces the previous controversial/stringent and Supreme Court squashed stressed asset resolution guidelines published in February 2018.

The main feature of the new Framework is that it relaxes several previous criteria related to stressed asset management under the 2018 version.

With the new prudential framework, the February 12th (2018) revised framework on the resolution of stressed assets stands cancelled.

Though the content of the previous revised framework (February 12th, 2018) and the newly issued prudential framework differs slightly, the purpose of both remains the same ie., management of stressed assets in the banking system.

Basically, both frameworks on Resolution of Stressed Asset are set of guidelines issued by the RBI as a circular to banks to manage their stressed assets (NPAs).

The Prudential Framework for Resolution of Stressed Assets 2019

The RBI has named the new guidelines as ‘Prudential Framework for Resolution of Stressed Assets’ in place of the ‘Revised Framework’ that was there in the February 12th, 2018 circular.

Why the new guidelines?

The February 12, 2018 circular was struck down by the Supreme Court in April 2019 after several companies had challenged the guidelines in court arguing the time given by the central bank was insufficient to tackle bad debt.

The SC has taken the case after complaints by corporate from various sectors infrastructure power etc. who found the RBI norm tough while dealing with their debts.

The Revised Framework (2018) became controversial as it contained a strict time-line for banks to resolve outstanding corporate stressed assets (NPAs) within 180 days. Otherwise, banks have to refer the corporate debt for the tough insolvency proceedings under the IBC Act.

An even tougher sub clause in the framework was to treat defaults of even one day to treat as NPAs. Or in other words, a company will be treated as a defaulter even if it missed the repayment schedule even by one day.

During the proceedings, various companies argued that the RBI circular applies to all corporate debtors alike, without looking into each individual’s sectors problems and attempting to solve them.

The Prudential Framework for resolution of stressed asset was expected to be address the tough provisions contained in the previous guidelines especially in the wake of the SC verdict. As expectedly, the new guidelines contain several relaxed norms. The most important one is that it abandons the one-day NPA classification for defaulters if they default the payment and instead introduces a 30-day notice period. This means instead of the first day of the default, the NPA period for stressed assets starts on the 31st day.

Following are the main changes and of course relaxations made in the Prudential Framework for Resolution of Stressed Assets.

1. New norm -it is voluntary of banks to go for insolvency procedures compared to the previous norm – banks have to (mandatorily) refer defaults to the NCLT, and resolution should be completed within 180 days.

The new norm makes it lenders choice to go for legal proceedings and insolvency or not. On the other hand, under the previous guidelines, banks should report the default to the NCLT and should complete the proceedings within 180 days.

2. A thirty-day Review Period instead of launching resolution plan on the first day of the default.

As per the new Prudential Framework, the lenders need not take resolution action on the first day of default. Rather, they have to make plans on the first thirty days of default to undertake the resolution of the stressed assets.

“In any case, once a borrower is reported to be in default by any of the lenders mentioned, lenders shall undertake a prima facie review of the borrower account within thirty days from such default (“Review Period”). During this Review Period of thirty days, lenders may decide on the resolution strategy, including the nature of the RP, the approach for implementation of the RP, etc. The lenders may also choose to initiate legal proceedings for insolvency or recovery.”

3. Based on the new Prudential Framework, the RBI will provide instructions to banks on specific defaults.

One of the faults found by the SC about the 2018 guidelines was that the RBI issued instructions to all corporate default without considering the merit of each default. The SC verdict disagreed with this approach and said that the RBI has powers only to give instructions on banks on stressed assets on specific cases under section 35AA.

The new Prudential Framework accommodates the correction suggested by the SC. Here, about the purpose of the new guidelines, the RBI recollects the SC verdict on section 35AA of the Banking Regulation Act and declares that the central bank will give specific directions to banks.

“Notwithstanding anything contained in this framework, wherever necessary, RBI will issue directions to banks for initiation of insolvency proceedings against borrowers for specific defaults so that the momentum towards effective resolution remains uncompromised.”

The guidelines here elaborate that “These directions are issued without prejudice to issuance of specific directions, from time to time, by the Reserve Bank to banks, in terms of the provisions of Section 35AA of the Banking Regulation Act, 1949, for initiation of insolvency proceedings against specific borrowers under the Insolvency and Bankruptcy Code, 2016 (IBC).”

So as per the new Prudential Framework, the RBI will be giving instructions to banks on specific defaults.”

The RBI circular says that the new guidelines come into force with immediate effect (ie., from June 7th, 2019 onwards).

4. Resolution of Stressed Asset Framework is extended to larger number of financial institutions.

Now, hence, under the new Prudential Framework, the stressed asset resolution framework has been extended to:

On the other hand, only scheduled commercial banks were to follow the guidelines under the previous format.

5. Agreement by all lenders required for resolution plan.

On the other hand, ratification by only 75% of the lenders were required under the 2018 framework.

These are the most important changes made by the RBI with the Prudential Framework 2019 over the Resolution Framework of 2018.

What corrections were made by the RBI to address the SC verdict?

The SC while asserting that the RBI doesn’t have the power under section 35AA of the RBI Act, said that the central bank can only direct banking institutions to move under the Insolvency Code if two conditions precedent are specified:

(i) that there is a Central Government authorisation to do so; and

(ii) that it should be in respect of specific defaults,”

To accommodate this verdict, the new Prudential Framework has made following corrections:

1. Banks have the choice to go/or not to go for insolvency on corporate default.

2. RBI will give directions on specific defaults in future based on the Prudential Framework 2019.

What is National Agricultural Market (NAM)?