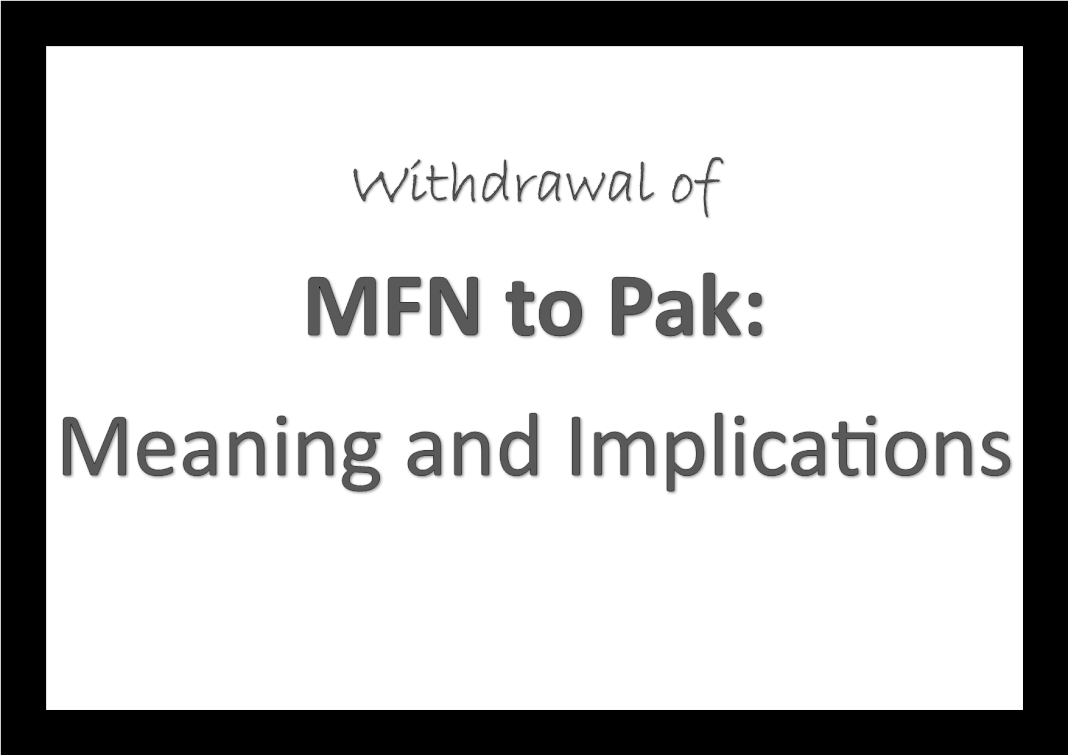 Trade in South Asia is always decided by political turbulence. In the latest development, a terrorist attack was occurred at Pulwama; the nation losing the life of 40 CRPF personnel and the Government has withdrawn the Most Favoured Nation (MFN) treatment given to Pakistan.

What is the meaning and implication of the government move?

For that we have to learn basics about the MFN and go through some background information regarding the India-Pak trade.

First is the MFN.

Here, the WTO as a trade promoting body has certain key principles or philosophical themes for its working. The National Treatment and Most Favoured Nation (MFN) treatment are the two core principles of the WTO.

The MFN, that comes under Article 1 of the GATT is basically a principle that advocates non-discrimination in trade matters.

What is Most Favoured Nation (MFN) treatment?

MFN is a status or treatment given by one country to another in trade matters under the WTO. It means that the recipient country of MFN will nominally get equal trade advantage as the ‘most favoured nation’ by the country granting the treatment.

MFN under WTO actually means non-discrimination and it doesn’t mean any special treatment to a specific country.

Under the WTO agreements, countries cannot normally discriminate between their trading partners. If a special favour is granted to a particular country, it should be extended to all other WTO members. The MFN is so important that it is the first article of the GATT, which governs trade in goods.

So, when India extends MFN to Pakistan, it is a promise to consider Pakistan in an equal footing with other trade partners (read – tariff on imports will be reduced).

Reasons why Pakistan was not ready to reciprocate are two:

Besides; to reduce the risk of the term MFN, Pakistan introduced a concept approach called Non-Discriminatory Market Access (NDMA) which is near to MFN. Islamabad promised to grant NDMA to India though no action was taken further.

The Government has withdrawn the MFN status given to Pakistan after the Pulwama terrorist attack that has taken the life of 40 jawans.

The extent of its implication is more applicable to India’s imports from Pakistan which is a meager of around half a billion (488 million in 2017-18). Imports during April-November 2018 was around $381 million indicating further decline in imports.

On Saturday (16th of February), the government raised customs duty on all import items from Pakistan to 200%. Hence, the imports from Pakistan is going to be negligible.

The freshly introduced 200% tariff is well above the MFN rate of 32.8% for agricultural goods and 10.7%, for non-agricultural items.

Though the MFN rate is much lower, India can still adopt a much higher bound rate (maximum rate on imports under WTO rules) of 113.5% on agricultural products and of 34.6% on non-farm products.

According to the government statement, raising of import tariff is as per the security interest provision of the Foreign Trade Act. The Foreign Trade (Development and Regulation) Act allows government to prohibit, restrict or regulate the import or export of goods on various grounds. Since the tariff is raised on security grounds, there is no need for India to furnish any information or to make any disclosures about the rational for the tariff imposition.

Potential for trade retaliation by Pakistan

The consequent decline in India’s export to Pakistan may adversely affect some of Pakistan’s industries that depends on Indian raw materials like cotton and chemicals. At the same time, exports from India through third countries (specifically, the gulf countries) and illegal channels will go up.

In conclusion, with Pulwama, there will come a trade disengagement between the two neighbours.

What is Advanced Pricing Agreement?

What is the Economics behind Net-Neutrality?