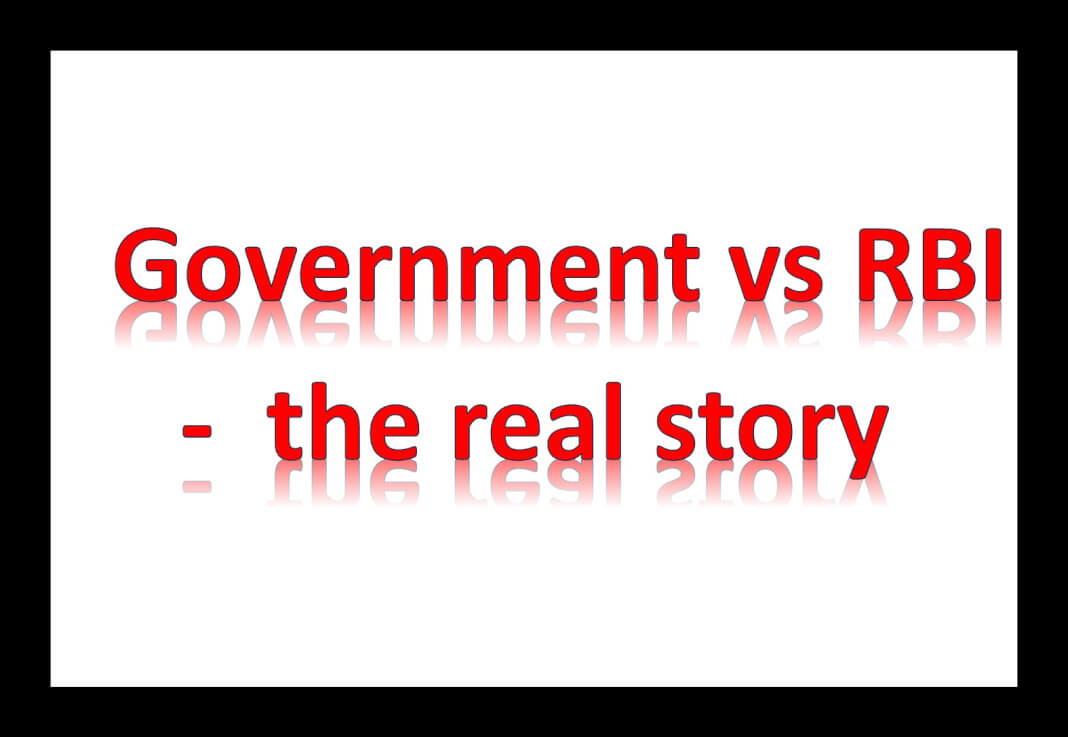 In recent weeks, there is an agonizing trend of conflict between the government and the RBI. The RBI is accountable to the government through various constitutional provisions and regulations. They are not equal power entities.

Still, why there is the recurring conflicts between the two at a time when the economy badly needs sophisticated and careful economy management interventions from the two?

The central bank and the treasury (read Finance Ministry) are historically not good friends in most economies. You must put the Ministry of Finance (instead of the government) on the one side and central bank on the other.

Both have the power and responsibility to manage the economy through their respective fiscal and monetary policies. A coordination between the two is needed to make the economy successfully manage all the problems.

Transfer of capital reserves to the government

The latest issue of conflict is the government’ demand for the transfer of a part of the capital reserves with the RBI. RBI is having a capital reserve of 28% or around 9.5 lakh crores and is a highly capitalized central banks in the world.

The logic of capital reserve is that like commercial banks, the RBI should have enough capital to manage its liquidity operations banks (Commercial banks have a minimum CRAR of 9%).

Connection between capital reserves and the autonomy of the RBI

More than just a fund transfer, capital for RBI is highly correlated with its autonomy and independence. When there is sizable capital, the RBI need not approach the government in a contingency situation to manage its loans operations to financial institutions like banks.

Hence, when the RBI has to independently operate its liquidity interventions, sizable capital reserves gives it confidence. In the past, several central banks were recapitalized by governments when the latter lacked funds to provide liquidity to banks. This was mainly due to high level of profit transfer by the central banks to the government.

Of all issues, the capital reserve transfer is the core area of the conflict between the RBI and the government. Here, Deputy Governor Viral Acharya strongly defended capital reserves  with the RBI as a necessary buffer to smoothly manage liquidity operations that the central bank performs.

On its part, the government is trying to design a new  criteria for fixing the right size of capital reserves for the RBI (revealed by the Economic Affairs Secretary).

Emergence of the conflict

In India, the conflict between the two arose so visibly during the time of former Finance Minister P Chidambaram. At that time, the RBI Governor was not ready to reduce the repo rate in accordance with the wishes of the FM. Since then, the government introduced several steps with or without success to control the regulatory powers of the RBI.

Some recent incidents indicate that the government is in a mood to encroach the regulatory powers of the RBI.

In this angle, there are two features regarding the conflict between the RBI and the Ministry of Finance. First, the tussle is not a recent one and second, the government has been continuously making several efforts over the last few years in intervening the powers of the RBI.

Following events will reveal the areas and sequence of the conflict between the two that was severely surfaced in the last ten years. Remember, the issues are presented from a truth finder angle so that you can understand the issues and enough care is to be made while presenting them in the examination.

All these developments show that the tussle between the Finance Ministry and the government is not a short-term issue. It can be solved only with an open mindset to financial regulations from the government side. Weakening the powers of the RBI will create chaos in the financial sector and the entire economy.

What is legal tender currency? How the concept was involved under...