Home Classroom What is the government vs RBI conflict on capital transfer? 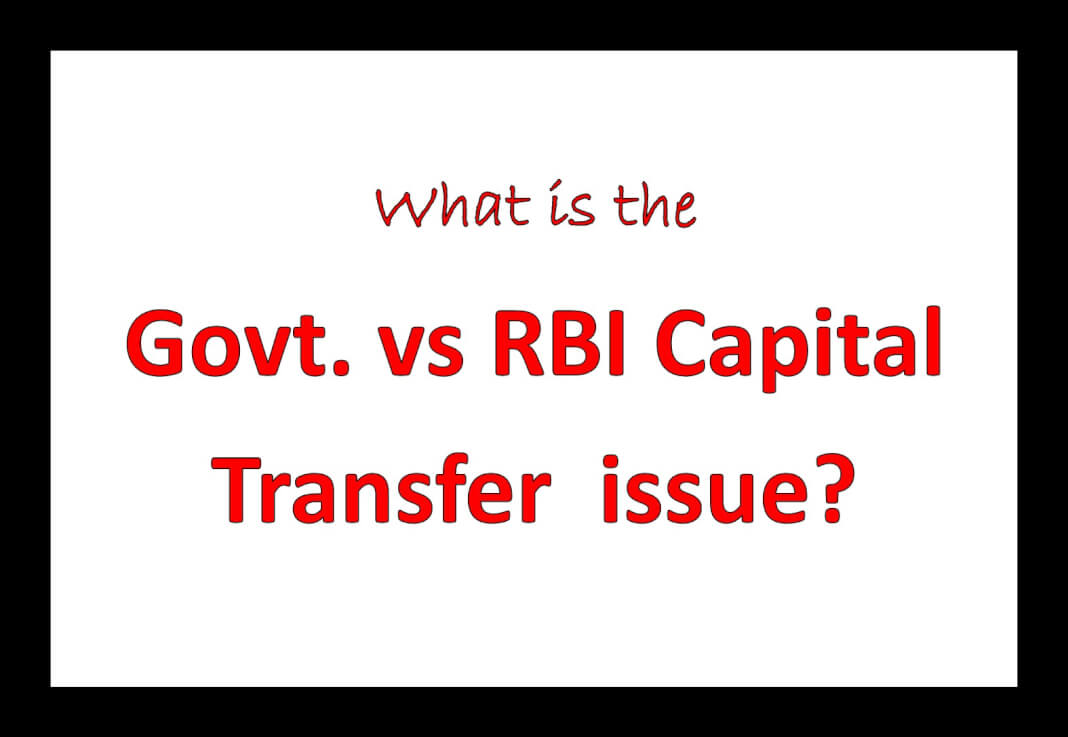 Of the total transfer, the important one is teh Rs 52637 crore transfer of surplus capital found by the Committee on Economic Capital Framework, charied by Dr Bimal Jalan. The other component (Rs 123 414 crore) actually is a customary transfer of profits of the RBI to the government.

The government and the RBI are in an intense tussle over the use of the central bank’s ‘excess capital’. The following questions and answers try to reveal the nature of the conflict between the two macroeconomic managers of the country.

As a bank, the RBI perform several financial transactions- it gives liquidity to commercial banks through LAF repo, MSF etc. Besides, the RBI also gives loans to the central and state governments. For such an operation, the RBI must have enough funds with it. The extra money in the form of capital keeps the central bank to be confident during any liquidity crisis by giving sufficient financial support to the various parties.

How the RBI gets capital?

RBI has a small paid up capital provided by the government during its inception time. But the high size of the capital it now holds is the result of its retained profits from its various operations through decades.

During the last few years, the government is insisting transfer of higher proportion of the RBI’s profit to the government. So, to make it systematic or rule based, the RBI has designed Staggered Surplus Distribution Policy.

What is the capital reserve with the RBI now?

The RBI maintains various types of reserves in the form of capital to cover various risks including market risk, operational risk, credit risk and contingency risk. All these risks may arose as the RBI has to interact with banks and government by providing financial support to them.  For the financial year ending June 2018, the RBI has a reserve of Rs 9.59 lakh crore. This reserve is comprised of mainly currency and gold revaluation account (Rs 6.91 lakh crore) and the contingency fund (Rs 2.32 lakh crore).

The foreign exchange reserve and the minimum reserves are not part of this capital reserves.

What is the connection between the RBI’s capital reserve and its autonomy?

As per the Annual Report 2018, the RBI has an asset of Rs 36.2 lakh crores whereas its capital is around 9.59 lakh crores. So, the capital as a percent of the assets is around 27%. The capital reserves of the RBI are well above that of several other leading central banks.

Remember, the Basel norms instructs commercial banks to maintain a CRAR (capital assets as percentage of assets) of 12%.

Why the government need capital reserves of the RBI?

As for the government, it has to find funds to solve the Rs 9 lakh crore bad debt problem. No source is visible given the huge amount of money required. Here comes the value of RBI’s capital reserves. It is reported that the government has demanded Rs 3.6 lakh crores from the RBI.

What is the RBI stance on government demand for using capital reserves?

The RBI has adopted a strong opposition to the government demand. Across the world, several central bank functionaries also historically adopted such a position.  RBI’s objections are based on three arguments:

(2) Use of RBI funds to finance fiscal deficit is undesirable.

(3) Capital reserve is closely related with the autonomy and independence of the central bank.

The surprising resistance point came from Viral Acharya – Deputy Governor of the RBI. In his speech (that triggered the fire exchange between by government) at A. D. Shroff Memorial Lecture in Mumbai, Acharya made a symbolic comparison of the current government attempt to the Argentinian government’s disastrous effort to use the Central Banks’ capital reserves in 2010.

“No analogy is perfect; yet, analogies help convey things better.” -was the way Acharya started his speech while comparing India with the permanent failure – Argentina.

Acharya indicated that across the world, there is increasing attempt by governments to encroach the capital reserves by proclaiming them as ‘excess reserves’.

“We have arrived at this situation because of the national government’s permanent trampling of institutions. Basically, I am defending two main concepts: the independence of the central bank in our decision-making process and that the reserves should be used for monetary and financial stability.” – Martin Redrado.

Acharya himself was sharp and explicit in indicating the RBI’ opposition to the use of capital reserves for fiscal needs.

“A thorny ongoing issue on this front has been that of the rules for surplus transfer from the Reserve Bank to the government, an issue that relates closely to the leading Argentine example in my introductory remarks.”

Acharya also pointed out protection of the RBI’s balance sheet as one of the three challenges for the RBI’s independence. The thirst to find excess reserves with the RBI will only led to Argentina type disasters – the Deputy Governor warned in his speech. “Using central bank reserves to pay government obligations is not a positive development and the concept of excess reserves is certainly open to debate.”

There is no need for any other proof that RBI technocrats (Governor, Deputy Governors etc.) will resist the government move strongly.

What is the government response to tide over RBI opposition?

The government response to the RBI resistance was revealed by the Secretary, Economic Affairs, Mr Subhash Chandra Garg. He indicated that the government will bring a ‘capital framework’ for the central bank. This framework is expected to find the amount of ‘excess reserves’ with the RBI.

The government has forced a meeting of the RBI Director Board on 19th of November. In that meeting, the five RBI members in the Board (Governor and the four deputy governors) may face severe pressure from the two government nominees- Sri Subhash Chandra Garg (Secretary Economic Affairs) and Sri. Rajiv Kumar (Secretary, Dpt. of Financial Services), for moving ahead with the government plans. In the eighteen-member board, rest of the members are also government nominees, coming from different walks of life and they also are expected to support Sri Garg’s stand. Historically, the Secretary of Economic Affairs leads the government side in its fight with the central bank.

What are Regional Rural Banks? What are the reform introduced for...