Home Main Why this budget is not incremental? 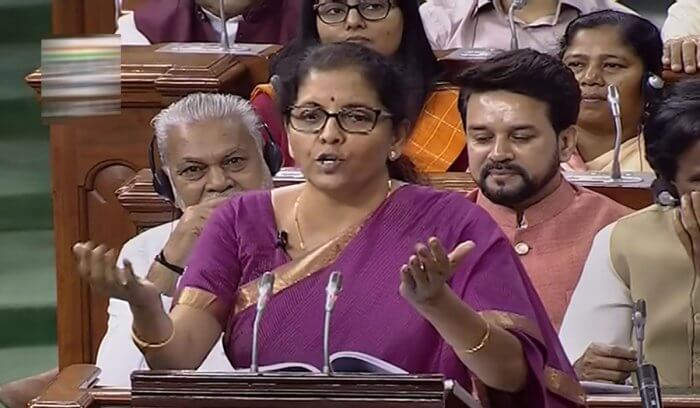 Nearly six months after the presentation of a large scale and full-fledged election budget, a new budget for the same fiscal year has been presented. Understandably, it is difficult for the new Finance Minister Ms Nirmala Sitharaman to make her first budget interesting. Leading conclusion about her budget presented on 5th of July was that it is incremental.

The budget may seem static from the financial side as the proposed expenditure under the new budget is around Rs 27.6 lakh crore compared to Piyush Goyal’s Rs 27.4 lakh crore budget.

But a close look will show that the budget has lot of ingredients worth to be noted. Some of the steps announced in the budget will give direction to this government’s future economic policy making.

The financial side of the budget remains identical to that of the budget presented in February. Total expenditure for the February budget was Rs 27.84 lakh crore whereas that presented by Nirmala Sitharaman is Rs 27.86 lakh crores.

2. Unique supportive measures to various sectors of the economy.

Perhaps the most important one is the visionary policy statement on higher education. Though the budget statement doesn’t make big expenditure commitments and projects, the budget announces significant change in India’s higher educational sector with the establishment of a Higher Educational Commission of India (HECI) instead of the UGC. Similarly, a National Research Foundation with Prime Minister as the Chairman is to be created to anchor research in the country.

Higher education in the country is a matter of worry given the fact that Chinese educational institutions are surging ahead in Asia and in the world. They have shown how educational institutions are critical in bringing scientific progress and economic resurgence. Something urgent is to be done in India on the higher education sector to make it competitive even at the Asian standards. The new budget takes this challenge.

But this budget has announced a deviation. The government is planning to sell its bond abroad. The procedure for borrowing is not elaborated. Chances are that the government will be using the borrowed money for some productive projects in areas like infrastructure. But the proposal that government is going overseas to get money is itself novel in the context of the last two decades’ budget making.

Advantage of overseas borrowing by the government is sizable for the domestic borrowers. Here, the struggle between the government as the largest borrower in our markets and the fund thirsty private sector in search for funds will be softened. A downward pressure on interest payments can also be expected.

The budget comes out with a bold agenda on the disinvestment front. Government will not be keeping 51% share in non-financial CPSEs. The message is clear- the strategic disinvestment route where the PSE is sold to the private sector will be enforced. This means pure privatisation.

Again, the disinvestment target of Rs 105000 crore will test the credibility of the fiscal deficit target. There is every chance that the target may not be met because the strategic sale exercise may take big time to implement.

4. The DFIs (Development Financial Institutions) are coming back!

The Industrial Finance Corporation of India (IFCI) was created in 1948, followed by ICICI in 1955, the IDBI in 1964 and so many institutions in later years including the India Infrastructure Finance Company (IIFCL) Limited in 2006.

DFIs were Masters of Project Finance and performed an exceptional role in their domain.

But they accumulated NPAs and became budgetary burden for the government. During the era of banking sector reforms, several committees suggested their winding up and as a result, most of them were converted into banks. The IDBI Bank, ICICI Bank, HDFC bank, Axis (UTI) Bank were born in that circumstance.

After the demise of DFIs, the corporate turned to banks for long term loans. What the DFIs provided to the industries were done by banks. But understandably, banks are not the type of institutions who can meet the industries’ big-ticket loans for long term. They are not masters of project finance. Rather, they should just mobilise deposits from the public and should give loans to the public.

The outcome of banks giving corporate loans were disastrous – banks accumulated big NPAs. Banks being closer to the public, their health and safety are important and is a sensitive issue. Hence, to relieve banks from the corporate duty, the government is thinking again to bring back the DFIs.

A committee will study about the possibility of establishing DFIs. This is what the Budget has declared about DFIs. It will be interesting to watch the future course of action.

5. NRIs can invest in Indian equity market like FPIs.

NRIs are big but unreliable investors in India. They bring around $10 -20 bn deposits in Indian banks annually. But their participation in the equity market was thin because as an investment class, there were lot of restriction for NRIs participate directly in the equity market. They come indirectly through several ways like the Participator Note route.

The budget here brings an interesting suggestion of allowing NRIs to come through the FPI route. This means that the NRIs will be regulated as FPIs. The outcome of such a step will be interesting. Perhaps some part of the bank deposit may be going to the equity market.

But the exact regulatory guidelines are also unknown. Still, NRIs coming through the FPI route will be a new feeling for the equity market.

6. FDI ceiling limit goes up in aviation, insurance and media

Budget also liberalised the FDI ceiling in three critical sectors – insurance, civil aviation and media. The decision to raise FDI ceiling in aviation is needed in the context of the trouble in India’s two airline companies – Air India and Jet Airways.

Altogether, the budget was not minimalist; rather proactive, and its exuberance can be visible through all these new steps and perhaps not through project announcements. We can’t’ rate the new budget by India’s first full fledged woman Finance Minister as incremental; rather it is substantial.