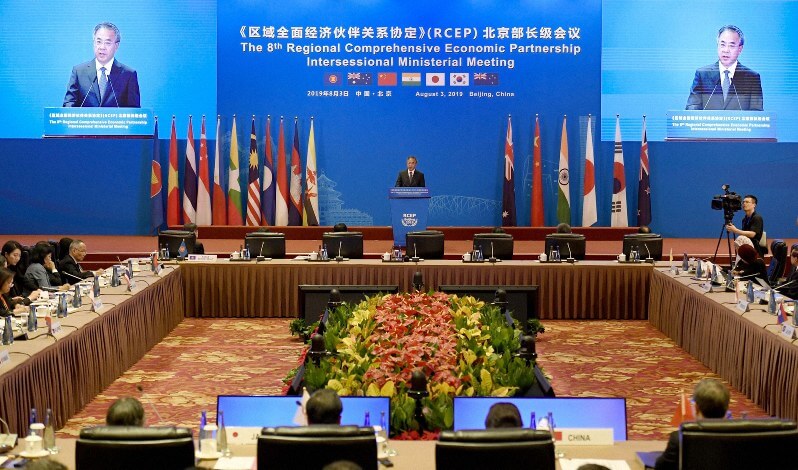 Developments on RCEP indicate that India is planning to exit the discussions before the trade bloc’s effective launch. An important meeting of the Commerce Ministers of the 16 member RCEP participant countries concluded at Beijing 2-3 August 2019.  Commerce Minister Piyush Goyal did not attend the meeting indicating India’s reluctance to join the bloc without getting its concerns addressed.

The meeting was the high level one after the preparing discussions held at Zhengzhou, capital of central China’s Henan Province where the trade officials of the members assembled. Officials were expected to give a final touch towards a deal by the proposed State Head’s meeting in November at Bangkok.

Discussions were postponed because of India’s general election and the 27th round of negotiations were held at Zhengzhou, from July 22 to 31. The meeting was expected to give a final shape to the trade bloc.

The RCEP discussions launched in 2012, missed several deadlines for its formation because of concerns and conflicting interests among members.

The Regional Comprehensive Economic Partnership (RCEP) if formed, is expected to be a titanic bloc as it covers 45 per cent of the world population, 25 per cent to global gross domestic product, a share of 30 per cent of global trade and 26 per cent of foreign direct investments.

Interestingly the efforts for the creation of RCIP is going on at a time when countries are moving away from trade blocs and the US is using bilateral trade agreements by minimising international arrangements.

East Asian media criticise that India is the biggest hurdle in the formation of the trade bloc because of its concern about potential flooding by Chinese goods.

Significant obstacles are there besides the Indian concerns. As in in the case of many other trade blocs, different phases of economic development of the member countries, trust difference between India and China, concepts about different standards in the agreement are creating trouble in discussions.

After the Beijing Ministerial meeting, the Chinese mouthpiece Global Times quoted a Chinese think tank Xu Liping about India’s critical stand for the realisation of the formation. Mr Liping, Director of the Center for Southeast Asian Studies of the Chinese Academy of Social Sciences, opined that “one of the major challenges lies in negotiations related to India’s market access.”

Besides India’s confusion, in recent weeks, the tit tat between Japan and South Korea on trade front has slightly affected the momentum. Still it is not going to make a structural adverse effect on RCEP.

For the bloc, the prolonged discussion and the difficulty in reaching consensus on key issues are hurting.

Discussions are going through a critical phase now and the countries are aware that the formation process has been prolonged, and a breakthrough is needed.

Singapore’s Trade and Industry Minister Chan Chun Sing indicated that the months ahead would be “critical” for negotiations. Singapore is a champion of the free trade bloc with its rich tradition of open trade.

India being the western most member and the only non-East Asian/non-Pacific country in the 16 member RCEP, was brought into the bloc after insistence from several ASEAN members. Throughout the seven-year discussions, New Delhi was concerned at the negative effect that the mighty trade agreement may create on its economy. Especially, the competitive East Asian economies with tremendous industrial excess capacity and strong supply chain networks may make it difficult for India’s industries to catch up. This is what the India-ASEAN free trade agreement has proved.

Several factors have tempted India to have a cautious approach. These include the heavy-weight presence of China and its ability to flood markets with cheap goods, bitter experience from the already running India-ASEAN trade agreement, domestic industries’ resistance, RCEP member’s reluctance to open their economy to India’s talents and IT and the inclusion of higher order agenda like ecommerce etc.

Already, the RCEP participants seemed to be accommodated India’s reluctance. They hope that the uncertainty about New Delhi’s participation will not delay the launch of the bloc. Still other issues are to be sorted among the fast-paced trade liberalising members – China, Japan and South Korea.

He asked China to grant meaningful market access to several of the products where India has some advantages like – IT and other services, pharma and in agriculture-oriented items -sugar and rice. This will help India to soften its trade deficit with China.

So far despite the adverse global conditions, Beijing failed to address India’s trade deficit concerns and created no space to give access to some of India’s globally competitive products –IT and pharmaceuticals.

Within India, various industry bodies and businesses have strongly voiced their opposition on RCEP. They described the idea as a meaningless and detrimental arrangement where the country is not going to get any benefit especially in the context of the ASEAN experience.

In his meeting, the commerce Secretary also raised the various difficulties being faced by the Indian services sector, including IT and IteS, in China and easing business visas by Beijing to our business travellers.

Earlier, the delegates of the top IT companies like TCS, Wipro, Infosys etc., have also intimated the government that despite having a long presence there, China remained a difficult market to do business.

In the context of the trade war, RCEP is an interesting engagement. More than that, it is a critical project for China to show it as the champion of free trade. Beijing’s hope is that the bloc will fill the trade gap created out of the friction with the US.

For China, the RCEP is an opportunity consolidate itself as the Asian leader creating a regional order and promoting greater economic integration within the East Asian space.

China can give market access to Indian goods and thus keep in the trade bloc. But experts point that Beijing is historically adamant on trade reciprocating gestures. Rather it plays only for its advantages.

In the case of RCEP, Beijing will be happy with deeper integration within the core East Asian region than for a weaker one by accommodating a doubtful India.

How Kerala becomes the knight in India’s Covid fight?

Dear Government, take your hands off the RBI