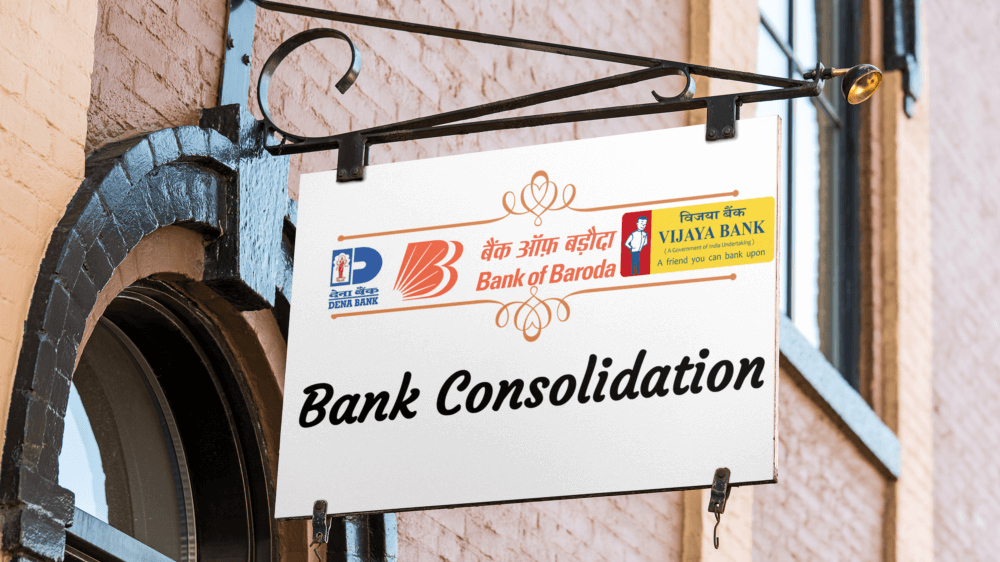 The Government proposed amalgamation of three nationalized banks to form the third largest bank in the country. As per the scheme announced by the Finance Ministry, two small nationalized banks – Vijyaya Bank and Dena Bank will be amalgamated under Bank of Baroda.

This is the first time that the government is coming with a plan for the consolidation of the 19 nationalized banks. Earlier, all state banks were merged to create the largest bank in the country under State Bank of India.

As of now, in terms of assets, Bank of Baroda is the fifth largest bank after SBI, HDFC Bank, ICICI Bank and Punjab National Bank (PNB). After the merger, the new entity is supposed to become the third largest bank pipping the trouble hit PNB and ICICI.

The choice of the banks for the amalgamation is also rational as among the three, there is a big bank (Bank of Baroda), an average performing bank (Vijaya Bank) and a weak bank (Dena Bank).

Dena Bank and Vijaya Bank are tiny entities as they come at 20th and 17th respectively in terms of asset size among nationalized banks.

The amalgamation may end the financial troubles of Dena Bank as the new entity can absorb its NPAs with moderate effort. Dena is considered as a stressed bank as it is placed under the Prompt Corrective Action Plan of the RBI.

The PCA by the RBI is like a watch list and banks are placed under it when they records higher level of stress in terms of NPAs, capital erosion etc. Once included under the PCA, banks have to follow some corrective measures in accordance with their trouble level.

Though eleven out of the 21 PSBs are placed under RBI’s Prompt Corrective Action, both BoB and Vijaya bank are not included in the list.

For the entire PSBs, the amalgamation is a right step to overcome their vulnerabilities. Still, a much bigger nationalized bank (bigger than the Dena Bank) that come under the PCA should have been chosen for amalgamation with a bigger bank like BoB.