Home Main Amazon should develop a new model for India 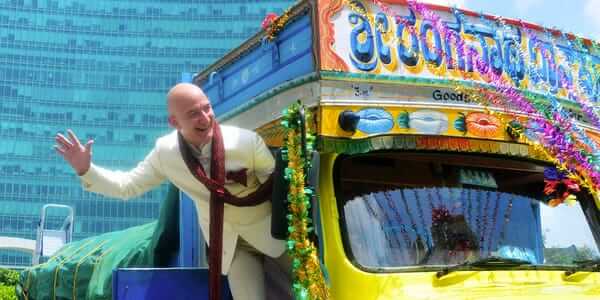 Just before the framing of the new budget, Amazon’s Jeff Bezos is making a tough visit to India. This time his mission is to soften any hard decisions for foreign ecommerce firms that can be placed in the budget.

Foreign ecommerce entities are getting scrutiny as their potential contribution to employment and domestic value addition are not going up compared to the business benefit, they are getting. At present, India’s ecommerce sector is controlled by two US based ecommerce MNCs – Amazon and Walmart owned Flipkart.

India, with potentially sizable market is unique with the absence of a domestic player. Amazon already rose to an established position. Still the US biggie is facing a risk as it is not able to repeat the ‘Alibaba contribution’ to the economy in terms of domestic procurement. In China, Alibaba was able to procure millions of goods from tens of thousands of Chinese small-scale enterprises.

Bezos’ new effort understandably is to check any government policy in favour of a potential entrant – the Jiomart. For Bezos, he knows the value of being Jio. The Reliance group disturbed the entire telecom industry with Jiophone when the Indian telecom market looked like a consolidated market. After that, most of the established firms lost their footing.

According to newspaper reports, shopkeepers are protesting his visit. Similarly, on the other end, competition commission is reviewing the working of ecommerce giants.  Clearly, a backlash is looming around the foreign ecommerce empires.

Jiomart is planning a different model for its ecommerce entry. In the planned strategy, jio predicts to take small businesses and retail sellers along with their platform. If that is the case, the opposition from small retail players at the organisational level can be muted.

In the current visit, Bezos requested meeting with the Prime Minister. But the PM’s office refused to meet the world’s richest man. That is a strong signal that something is happening in India’s ecommerce sector.

Bezoz already offered to invest $ 1 bn in India to help the small and medium enterprises.  He also offered more exports from India. Still, lack of quality supply unlike in the case of China comes a potential stumbling block for Amazon’s India plans.

Amazon hence should create a new model for India, that is accommodative of India’s small enterprises, and that one for all players including from politics. In that effort, the US firm need not fear to emulate Alibaba. Absense of that may disrupt Amazon’s business in the country; with potential entry.