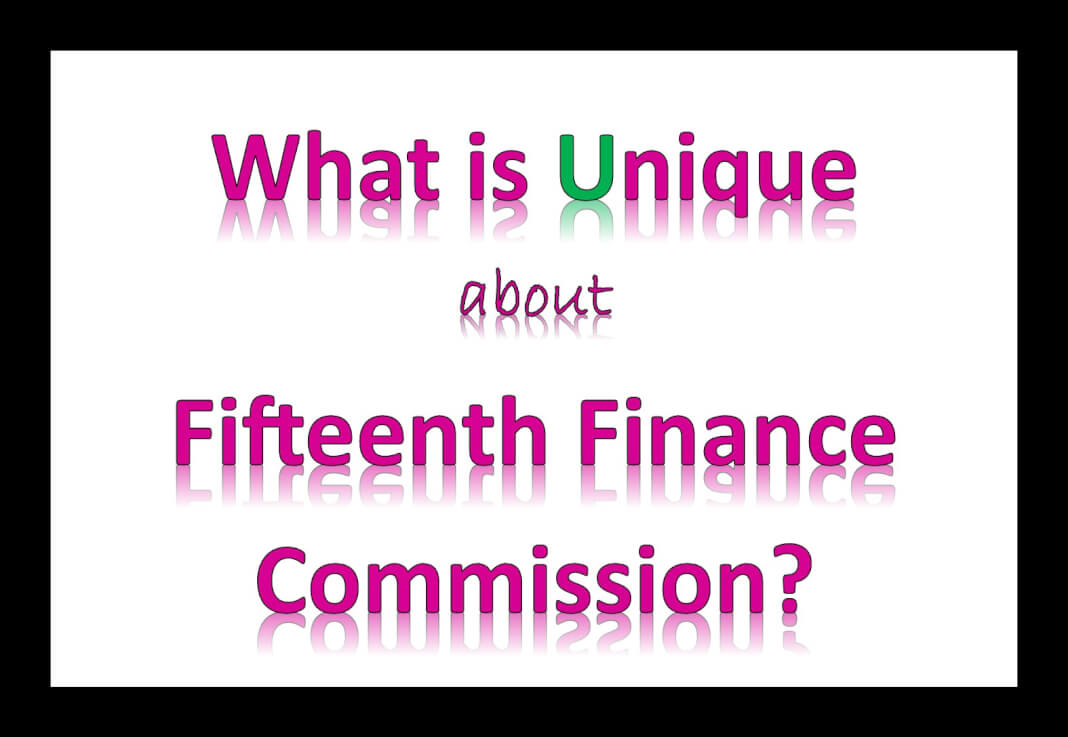 All these makes the Fifteenth Finance Commission and its responsibilities very important.

What is a Finance Commission (FC)? What are its responsibilities?

The article (280) prescribes that the President of India shall constitute a Finance Commission in every five years to give recommendations to him about the transfer of central revenues (tax) to the states and its allocation among them (states) and other matters assigned to it.

There are three core areas for FCs to make recommendations traditionally:

(1) resource transfer to the states and the criteria for the allocation of such resources among the states, the (2) principle that should guide the allocation of grants in aid to the sates out of the center’s Consolidated Fund and the (3) measures to support finances of the local bodies are to be suggested by the FC.

Besides these traditional core resource transfer recommendations, Finance Commissions have to make some expertise functions assigned by the President from time to time (like to study the fiscal situation of both the centre and states). Such responsibilities are mentioned under Section 3 (d) of Article 280.

What is there in the Terms of Reference of the Fifteenth Finance Commission?

The Terms of Reference for the Fifteenth Finance Commission has been given under eight (1 to 8) guidelines. The first one which is added below contains the traditional three recommendatory functions of the finance commission. Here:

(1) the Fifteenth Finance Commission has to make recommendations on:

(iii) The measures needed to augment the Consolidated Fund of a State to supplement the resources of the Panchayats and Municipalities in the State on the basis of the recommendations made by the Finance Commission of the State.

After this core responsibility incorporated under item (1) of the ToR, the XV FC has been asked to make some customized reference topics that are incorporated from item 2 to item 8.

(2) Asks the FC to consider the finances of the centre and states, fiscal consolidation map etc.

But under this head, the ToR specifically asks that “The Commission may also examine whether revenue deficit grants be provided at all.”

(3) Here, the FC is asked to consider six ((i) to (vi)) federal finance aspects while making its recommendations. Some of these are:

(i) The demand on the resources of the Central Government particularly on account of defence, internal security, infrastructure, railways, climate change, commitments towards administration of UTs without legislature, and other committed expenditure and liabilities; (this consideration is from the center’s angle).

(ii)The demand on the resources of the State Governments, particularly on account of financing socioeconomic development and critical infrastructure, assets maintenance expenditure, balanced regional development and impact of the debt and liabilities of their public utilities; (this is made from the states’ angle).

(iii) The impact on the fiscal situation of the Union Government of substantially enhanced tax devolution to States following recommendations of the 14th Finance Commission, coupled with the continuing imperative of the national development programme including New India – 2022; (this aspect gives the idea that after the 14th FC, states got tremendous revenue whereas centre is facing shortages).

(iv) The impact of the GST, including payment of compensation for possible loss of revenues for 5 years, and abolition of a number of cesses, the compensation to states etc., on the finances of Centre and States;

(v) On article (293), that is about the conditions that can be set by the centre on states’ borrowings.

Now, besides these aspects, the ToR contains nine measurable performance-based incentives for states that can be considered by the FC for making a proposal on them. These nine incentives are attached under item (4) of the ToR.

(4) Commission may consider proposing measurable performance-based incentives for States, at the appropriate level of government, in following areas ( briefly mentioned and only the important ones are mentioned in this article).

(i) Efforts made by the States in expansion and deepening of tax net under GST;

(ii) Efforts and Progress made in moving towards replacement rate of population growth;

(v) Progress made in increasing tax/non-tax revenues, promoting savings by adoption of Direct Benefit Transfers and Public Finance Management System, promoting digital economy and removing layers between the government and the beneficiaries;

(vi) Progress made in promoting ease of doing business.

(vii) Provision of grants in aid to local bodies for basic services and other incentives.

(viii) Control or lack of it in incurring expenditure on populist measures.

An important one in the ToR is the specific guideline that the Commission should follow 2011 census population figures.

The sixth (6) guideline is for disaster management initiatives and the other two guidelines (7 to 8) are of just procedural importance.

What is Yield Curve for bonds?

What is Automatic Exchange of Information (AEOI)?