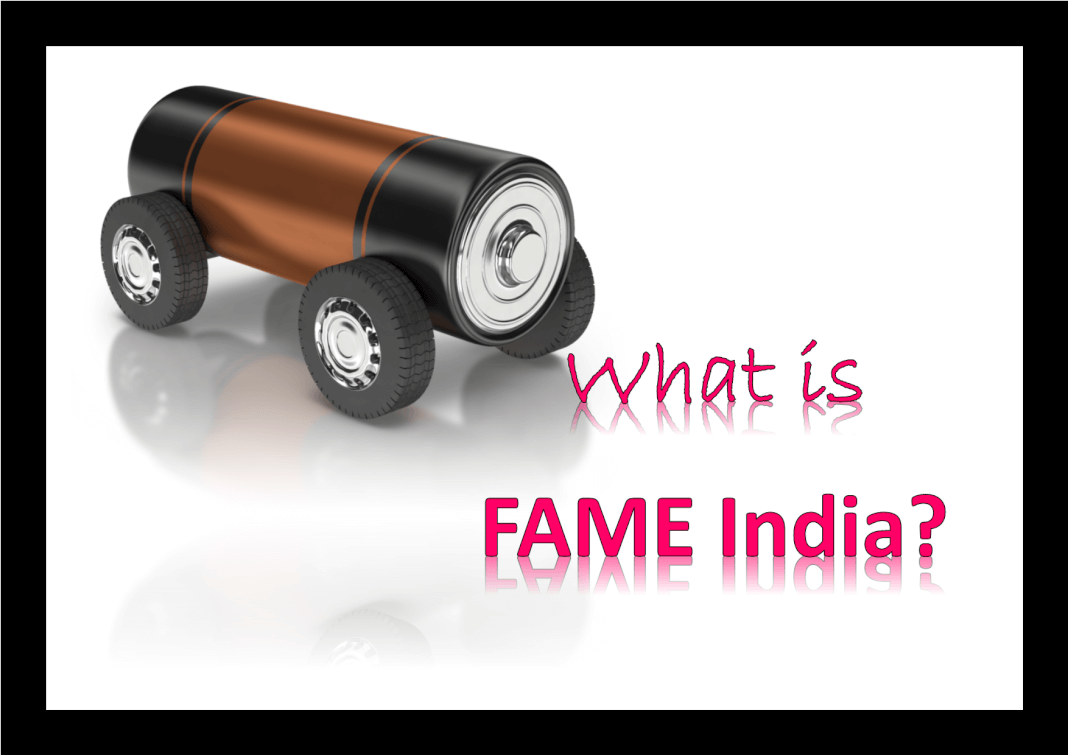 The FAME India (Faster Adoption and Manufacture of (Hybrid and) Electric Vehicles) Scheme is an incentive scheme for the promotion of electric and hybrid vehicles in the country. Ultimate objective of the scheme is to promote electric mobility and the scheme gives financial incentives for enhancing electric vehicle production and creation of electric transportation infrastructure.

FAME was launched by the Ministry of Heavy Industries and Public Enterprises in 2015 to incentivize the production and promotion of eco-friendly vehicles including electric vehicles and hybrid vehicles.

The Scheme operates in two phases.

FAME India is a part of the National Electric Mobility Mission Plan. Main thrust of FAME is to encourage electric vehicles by providing subsidies.  Under the NEMMP scheme, the government aimed to invest Rs 14000 crore in creating infrastructure and promoting the use of electric vehicles.

Vehicles in most segments – two wheelers, three wheelers, electric and hybrid cars and electric buses obtained the subsidy benefit of the scheme.

Benefits of the FAME scheme was restructured after the launch of FAME -II. Incentives to the various type of vehicles are shown in a later part.

The second phase is an expanded version of the first phase. FAME India Phase II has a total outlay of Rs 10000 Crores over the period of three years from 1st April 2019 to 2022.

For the overall monitoring, sanctioning and implementation of the scheme, an inter-ministerial empowered committee – ‘Project Implementation and Sanctioning Committee’ (PISC) that is headed by the heavy industry secretary, shall be constituted.

Following are the incentives given to various categories of vehicles under FAME – II.  Incentives will be given on the basis of prescribed ex-factory price limits.

Electric two wheelers: incentives will be provided for 10 lakh registered electric two-wheelers of Rs 20,000 each.

Electric four wheelers:  An incentive of Rs 1.5 lakh each to 35,000 electric four-wheelers with an ex-factory price of up to Rs 15 lakh.

e-buses: support to 7,090 e-buses with an incentive of up to Rs 50 lakh each having an ex-factory price of up to Rs 2 crore.

The scheme proposes for establishing charging infrastructure and for this about 2700 charging stations will be established in metros, other million plus cities, smart cities and cities of Hilly states across the country. Objective is to create at least one charging station in a grid of 3 km x 3 km.

On the highways, charging stations will be established on both sides of the road at an interval of about 25 km each.

Of the total allocation, Rs 1,000 crore has been allocated for setting up charging stations for electric vehicles in India.

Phase I of FAME

Phase I of the FAME-India Scheme was launched on April 1st, 2015 and extended to March 31, 2019. Its original time period was two years. The scheme was implemented with an outlay of Rs 895 crore.  Approximately 2,18,625 Electric Vehicles were ‘promoted’ by FAME I till July 2018.

The mother programme of FAME- the National Electric Mobility Mission Plan (NEMMP) 2020 was launched in 2013 to achieve sales of six-seven million units of electric vehicles and thus to realise fossil fuel saving of 2.2 to 2.5 million tonnes.

Such a promotion of electric vehicles will substantially lower vehicular emissions and decrease in carbon dioxide emissions by up to 1.5% by 2020.

In early 2018, the Ministry of Power launched the new National Electric Mobility Programme with broad objectives. Here, the focus is for establishing the electric charging infrastructure and a policy framework to set realise more than 30% electric vehicles by 2030.

What is Financial Stability and Development Council (FSDC)?

What is Peer to Peer Lending NBFC (NBFC – P2P)?