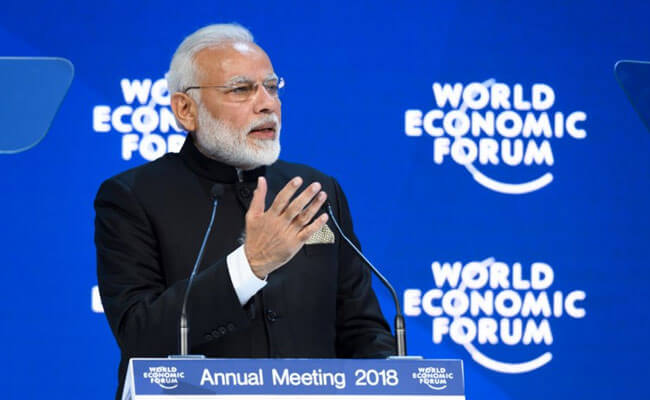 When Prime Minister Narendra Modi equalled protectionism with terrorism, it became a stronger attack than that was made by his Chinese counterpart Xi Jinping a year back at Davos.

“Many countries are becoming inward focused and globalisation is shrinking, and such tendencies can’t be considered lesser risk than terrorism or climate change,” Modi told in an address of Business leaders at the WEF.

“Instead of globalization, the power of protectionism is putting its head up,” Modi observed about the current trend.

“Their wish is not only to save themselves from globalization, but to change the natural flow of globalization.”

His strong words against the anti-globalisation policy that is explicitly followed by the US President Trump and secretively admired by Europe has indeed surprised several observers. More than anything else, the staunch supporter of globalisation of the current format -China has welcomed it. Main grievance of the West is that globalisation in its current format has mainly benefited China.

Trump is expected to make his address at Davos on Friday.

In 2017, Xi set the tone of the Davos meet and made remarkable defence of globalisation. China has indicated its happiness at the anti-protectionism statement of Modi

The Chinese diplomat indicated that her President was supporting an inclusive globalization. According to her Xi called for moving globalisation to a more open, inclusive, universal, balanced and win-win direction.

She also said China would like to work with India and other countries to strengthen globalisation process for the benefit of all countries.

Huawie’s exclusion is not a small decision

Govt. comes out with Duty Drawback push to extract gains from...