The Reserve Bank of India (RBI) has developed an Economic Capital Framework (ECF) for determining the allocation of funds to its capital reserves so that any risk contingency can be met and as well as to transfer the profit of the RBI to the government.

There are two clear objectives for the ECF. First, the RBI as a macroeconomic institution has the responsibility to fight any disorder especially a crisis in the financial system. Here, to meet such a crisis, the RBI should have adequate funds attached under the capital reserve.

Second is transferring the remaining part of the net income to the government.

What is Economic Capital Framework?

The ECF is an objective, rule-based, transparent methodology for determining the appropriate level of risk provisions (fund allocation to capital reserve) that is to be made under Section 47 of the Reserve Bank of India Act.

Previously, there were several attempts to frame an ECF for the RBI. But under the changed circumstances, the RBI central board constituted a new committee (under Bimal Jalan) to design an ECF in 2018.

The Central Board of the RBI in its meeting held on November 19, 2018, in consultation with the Government of India (Government), constituted an Expert Committee to review the extant ECF of the RBI. The Committee was chaired by former Governor Bimal Jalan. RBI has a sophisticated practice of upgrading capital framework. In the past the Subramanyam Group (1997), Malegam Committee (2014), ECF (2015) and the Usha Thorat Committee (2004) were appointed to make recommendations on the ECF.

Recommendations of the Bimal Jalan Committee on ECF for the RBI

The Expert Committee to Review the Extant Economic Capital Framework was appointed at a time when the transfer of RBI’s net income to the RBI touched 99% for several years. Similarly, several observers opined that the RBI is having surplus capital as it is one of the highest capitalized central banks in the world. The Committee was appointed in November 19 and its report was published on August 28th, 2019.

Following are the main recommendations of the Committee on ECF.

Here, after devising a new methodology, the Committee on ECF found that the available risk buffers (capital available with the RBI) is around 26.8% of the assets. What is required is 20. 8% to 25.4%. Hence, there is a surplus capital reserve with the RBI. 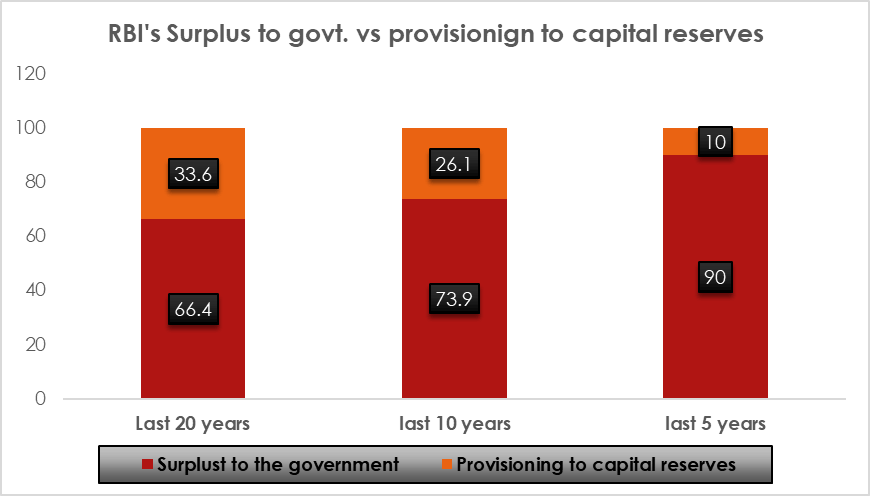 RBI’s capital reserve has five components. The most important one is the Contingency Fund that is holding bulk of the yearly addition of money from the RBI through provisions. Other three components are just revaluation accounts whereas the remaining asset development fund is meager. It is from the contingency Fund that the RBI is allocating funds to strengthen the revaluation accounts.

The Jalan Committee report recognizes that the Contingency Risk Buffer is the country’s savings for a ‘rainy day’ (a financial stability crisis) which has been consciously maintained with RBI in view of its role as Lender of Last Resort (LoLR).

The financial stability risks like the Global Financial Crisis is the rarest of the rarest. Here, the Committee recommended that the risk buffer in the range of 5.5 per cent to 6.5 per cent of the RBI’s balance sheet for meeting this risk. But at present, the available level is 2.4 per cent of balance sheet as on June 30, 2018.

Even if the RBI’s economic capital could appear to be relatively higher, it is largely on account of the revaluation balances which are determined by exogenous factors such as market prices. Nearly 73% of the capital reserves are from revaluation gains and only the rest from equity injection from the government. This is a weak feature of the seemingly high capital reserves of the RBI. 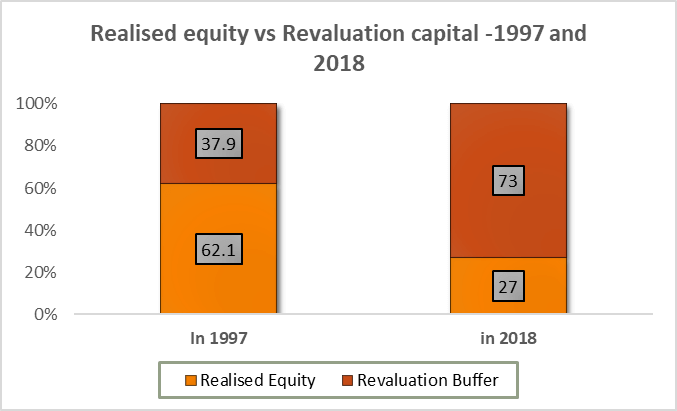 Out of the RBI’s total buffer or capital reserves, nearly 73% comes from the high revaluation of its assets like foreign currency, gold etc. This valuation can fluctuate. On the other hand, the equity contribution from the government (this is actually, the provision of net income of the RBI to liquidity Contingency Fund and Asset Development Fund of the RBI) is the one that really matters (that is just around 27% of the total capital reserves).

The Committee recommended the inclusion of the revaluation balances (from valuation gains of gold holdings of the RBI etc.) as a part of RBI’s overall risk buffers. At the same time, due recognition should be given to their volatility, limited usability, significant strategic and operational constraints on their monetization.

The revaluation balances can’t be used in an emergency situation since, the gold, foreign currency assets etc can’t be sold overnight or their selling has strategic issues. Hence, the only component of the capital reserve is the Contingency Fund.

Measures to address the volatility of the revaluation accounts should be designed.

The Committee identified different types of risks for the RBI:

The Committee observed that there are no significant threats from some of the risks. Hence the Committee suggested keeping reserves to meet the following type of risks.

(i) Monetary and financial stability risks

(iv) A shortfall, if any, in revaluation balances vis-à-vis market risk.

To keep the financial resilience of the RBI regarding the maintenance of capital reserves, the RBI adopts Expected Shortfall (ES) Methodology to measure the market risk (and thus to decide the amount to be kept as capital reserves).

The Committee observed that providing emergency money to banks will be riskier if banking sector has higher level of non-performing asset (NPA).

ELA is a crisis time financing given by a central bank to financial institutions including banks who need temporary liquidity needs.

On ELA, significant credit risk can arise from ELA operations during periods of stress. RBI can face ELA losses, even when though major part of the banking sector is in the public sector. Losses can occur when ELA support is provided to private sector banks.

According to the report, large public sector ownership was a positive factor preventing bank runs in the past. But the rise of NPAs has increased recapitalisation by the government.

What are the initiatives for providing clean energy to rural masses?