Home Classroom RBI’s Central Board of Directors: Composition and Functions

RBI’s Central Board of Directors

The affairs of the RBI are managed by the Central Board of Directors (CBD). It is the apex body in the Reserve Bank’s organizational structure.

The Central Board is appointed by the Government under the provisions of the Reserve Bank of India Act, 1934. It has primary authority and responsibility for the oversight of the Reserve Bank. The Board delegates specific functions to the Local Boards and various committees. The Governor is the Reserve Bank’s chief executive.

The Central Board has the primary authority and responsibility for the oversight of the Reserve Bank. General superintendence and direction of the Bank’s affairs is the core function of the CBD. It delegates specific functions to the Local Boards and various committees. The other wings of the RBI like Board for Financial Supervision and other technical committees derive their power from the CBD.

Constitution of the Central Board of Directors

The CBD members are appointed by the Central Government.  Section 8 of the RBI Act 1934 instructs about the composition of the Central Board. Members of the Board are appointed for a period of four years. The RBI Governor can have a maximum tenure of five years.

Official Directors: The Governor and four deputy governors are automatically members of the CBD and they are known as the official directors.

Among the ten nominated members, two will be Government officials representing the Government, who are usually the Finance Secretary/Economic Affairs Secretary to the Government and remains on the Board ‘during the pleasure of the Central Government’. 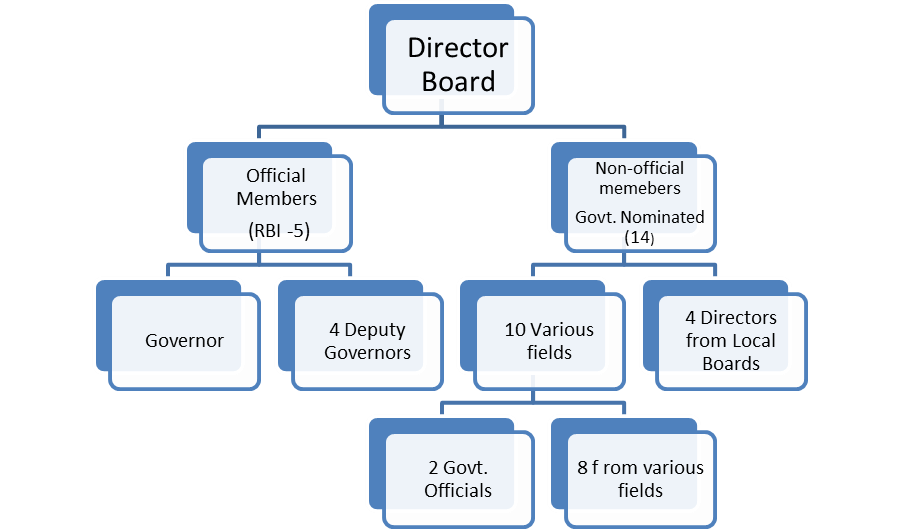 Following were the members of the Central Board as on November 19, 2018 where the Board took a crucial decision on various RBI related issues. The CBD has 18 Directors (Five – Governor and Deputy Governors and thirteen Non-Official Directors).

The Reserve Bank also has four Local Boards, constituted by the Central Government under the RBI Act, one each for the Western, Eastern, Northern and Southern areas of the country, which are located in Mumbai, Kolkata, New Delhi and Chennai. Each of these Boards has five members appointed by the Central Government for a term of four years. These Boards represent territorial and economic interests of their respective areas, and advise the Central Board on matters, such as, issues relating to local cooperative and indigenous banks. They also perform other functions that the Central Board may delegate to them.

Appointment of the Governor and Deputy Governors

What are Small Savings Schemes (SSSs)?